I wonder what Gabbi Giffords and her family think of this display:

Earlier this month, Arizona State Senator Rick Murphy introduced four bills designed to curb union’s collective bargaining rights in the state. Union members/occupiers held a protest rally against the measures on February 3rd. One of the signs carried at the rally shows the kind of civility we can expect from progressives: 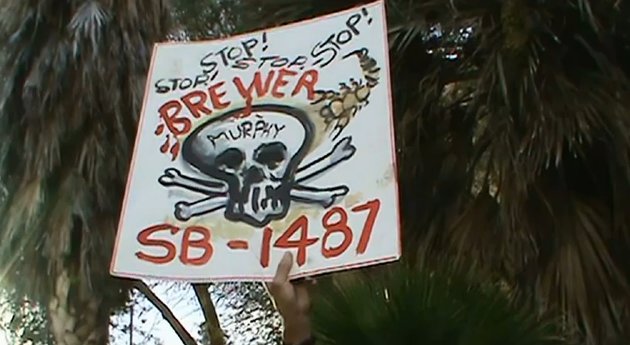 You can see the video this came from here. Keep in mind, this protest took place in Tucson where, just last January, Jared Loughner shot 19 people, leading to a nationwide call for more civility and a “new tone” in politics. The President himself weighed in on this during a nationally televised memorial service.

So the unions want to kill state representatives for proposing bills let workers opt out of paying dues. Delightful.

Collective bargaining, which requires workers to pay dues whether they want to join a union or not, is legalized thievery. If you are compelled to pay dues against your will -- to a group of fat-cat union bosses with none of your interests in mind -- you are an indentured servant.