Now that the Ron Paul-Mitt Romney alliance is out in the open, the new Ron Paul banner ads are here!

Ron Paul's campaign has admitted that it is directly supporting Mitt Romney. The Paul campaign is spending its contributors' money, for instance, by running anti-Santorum attack ads in Michigan even though Paul himself isn't actively campaigning in the state!

With that in mind, I would like to present the latest Ron Paul banner ads: 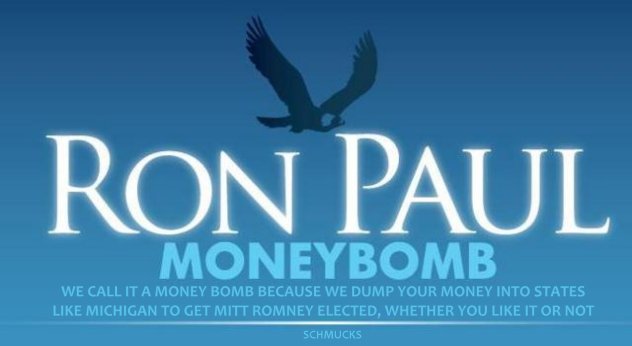 Word has it that Paul's faux campaign is all about getting his son Rand on the ticket as a V.P.

News flash: Mitt Romney has a long tradition of, eh, changing his mind, so I would take that kind of promise with a huge grain of salt.

You are so full of sh-t and so transparent. I bet you're wearing nothing but a sweater vest right now, aren't you? Paul is actively campaigning in Michigan as evidenced by the many events and rallies he has booked there within the next few days. Also evidenced by the satanorum fake ad buy in the state. Not even clever of you. Just downright weasely.

Dude. Did you read the article I linked or not?

This is well-known throughout the GOP.

It's been all over the media.

And you're denying it?

Talk about full of it.

Yes, so RuPaul's own advisers lied on tape.

Wow, you editorialized the SHIT out of this story, didn't you?

1) You are an idiot if you believe anything Weigal says. His reputation as a rumor monger is unsurpassed.

2) As far as it being "well known throughout the GOP," am a Republican and hold elective office in my state, so I'm pretty up on things. What is well known is that Ann Romney and Carole Paul have become friends over five years, and that both Ron Paul and Mitt Romney, despite their vast ideological differences, are gentlemen. Of course, I doubt you even know what that means.

3) Michigan is not a winner take all State, so Paul is likely to pick up delegates. He has been actively campaigning there.

4) I just stumbled across your insane drivel, and hope to not do so again. I have seen the Jesse Benton interview et al, and you, sir, are a nauseating liar. You must be an Obamabot who realizes Ron Paul could beat your demi- god hands down unless the Dems pull another election fraud, as they did to Nixon in 1960 (before you were born, I'm sure).

Ron Pauls' opinions on the Federal Reserve and the horrible disaster it has created for the USA are 100% accurate. ANY candidate / President would do this country an incredible positive service by having him attempt to untangle the mess we are in. Most people don't even know the concept of "debt money" otherwise they wouldn't even use Federal Rederve Notes for toilet paper, let alone currency.

Ron Paul has NEVER served on any of intelligence or military committees in US HR. His rants about the CIA and the intelligence community sound positively insane.


However, I will vote for ANYONE over our Marxist-in-Chief

Bob D @ 1:36 pm
Did you read the link?
Doug said nothing about RuPaul supporters (you did).

Nothing brings them out like a RuPaul story !!!!
RuPual sells out !!!!