Is there a more malevolent Statist hack in Congress than Chuck "Schmucky" Schumer (which is the nickname he prefers, I hear)? 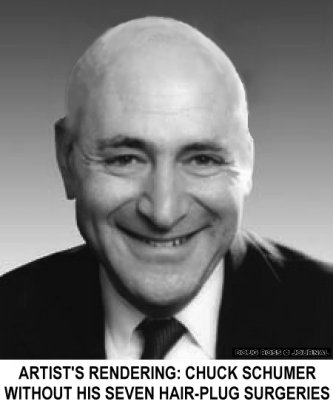 Schumer on Sunday urged Secretary of State Hillary Rodham Clinton to press Saudi officials to expand production, noting that the kingdom is producing well below its capacity of 12.5 million barrels per day.

Republicans are hopeful that the letter provides a political opening to undercut Democratic and White House energy policies.

“Rather than approve the Keystone pipeline, the Democrats’ energy plan now calls for the most powerful nation in the free world to politely ask other countries for more oil and cross our fingers,” he said in a statement.

Not only did President Obama block the monstrous Keystone XL pipeline -- which would have helped reduce America's dependence on foreign oil -- but Schumer himself has helped block drilling throughout the United States.

Consider this blast from the past. Mr. Peabody, set the Wayback Machine to April of 2008:

Now, yesterday ... [President Bush] made a presentation on energy and said much of the same thing you just said here; and Senator Schumer from New York went out and responded to it and said, "If we started drilling in ANWR today we wouldn't have a drop of oil for ten years." Well, of course, Bill Clinton vetoed the first time this came up in 1994. We could have been at this four years according to his ten-year plan. He also said something that mathematically doesn't make sense. He said that this million barrels a day that ANWR would produce would reduce the price of gasoline or oil -- I forget which one he specified -- by a penny. Well, that's absurd, because when the price of oil... When we lose a million barrels in the supply, does the price only go up a penny? They're using scare tactics, here. We need resources. We need our oil, and you got Schumer out there saying, "No, it wouldn't matter," and they're misleading people thinking that there's a substitute for it right around the corner when there's not.

Democrats are provably wounding America's economy -- and its national security posture -- through their defective, Utopian schemes.

I love that lame excuse, "it will take years before we see a drop...". Why should I quit smoking, it will take months before I see benefits? Why should I exercise now, it will take a while to see any results from that?...I'll just wait ten years and think about it again.. Geniuses!
Of course, they are more than willing to invest in 'energy from algae' and wait the requisite millenia for that 'smart power' to show fruit.

In their quest for "free" birth control for all the Democrat party has successfully put a condom on the US economy and hopes to sterilize it.

I believe that Schumer has never done anything other than hold elective office. He went directly from law school into government, never even bothering to take the bar exam (probably would have flunked it anyway).

In sum, a career politician and blowhard.

Is this all part of some Cloward Piven strategy?