The Wall Street Journal (via AEI) has the uncomfortable low-down on what Obamacare means:

Think the contraception decision was bad? Wait until bureaucrats start telling your insurer which cancer screenings to cover

Offended by President Obama's decision to force health insurers to pay for contraception and surgical sterilization? It gets worse: In the future, thanks to ObamaCare, the government will issue such health edicts on a routine basis—and largely insulated from public view. This goes beyond contraception to cancer screenings, the use of common drugs like aspirin, and much more. 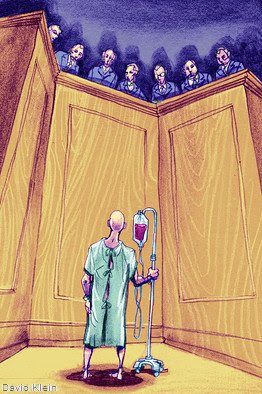 Under ObamaCare, a single committee—the United States Preventative Services Task Force—is empowered to evaluate preventive health services and decide which will be covered by health-insurance plans.

The task force already rates services with letter grades of "A" through "D" (or "I," if it has "insufficient evidence" to make a rating). But under ObamaCare, services rated "A" or "B"—such as colon cancer screening for adults aged 50-75—must be covered by health plans in full, without any co-pays. Many services that get "Cs" and "Ds"—such as screening for ovarian or testicular cancer—could get nixed from coverage entirely...

...Americans first became familiar with the task force in November 2009, when it made the controversial decision to recommend that women ages 40-49 shouldn't get routine mammograms. More recently, it rebuffed routine prostate-cancer screening and the use of tests that detect the viruses that can cause cervical cancer.

...The task force is a part-time board of volunteer advisers that works slowly and is often late to incorporate new science into its recommendations. Only in 2009 did it finally recommend aspirin for the prevention of stroke and heart attack among those at risk—decades after this practice was demonstrated to save lives and had become part of standard medical practice.

• Congress should make the task force "subject to the Federal Advisory Committee Act, which would at least require it to hold its deliberations in public."

• And Congress should likewise "let private health plans—and their members—decide on their own how preventive tests and treatments should be covered."

All of this is a brutal wake-up call for Americans: Obama's contraception mandate isn't an anomaly. It's the sign of things to come.

HOW EFFIN DUMB ARE THESE GUYS?

THESE MORONS ACTUALLY THOUGHT THAT THEY COULD MANDATE INSURANCE COMPANIES TO COVER CONTRACEPTIVES AND IT WOULD BE FREE OR LOWER COSTS.