Poster o' the Day (actually inspired by a Washington Post article, if you can believe it)

If you're a Democrat and you've lost the WaPo...

Sanjay Wagle was a venture capitalist and Barack Obama fundraiser in 2008, rallying support through a group he headed known as Clean Tech for Obama.

Shortly after Obama’s election, he left his California firm to join the Energy Department, just as the administration embarked on a massive program to stimulate the economy with federal investments in clean-technology firms. 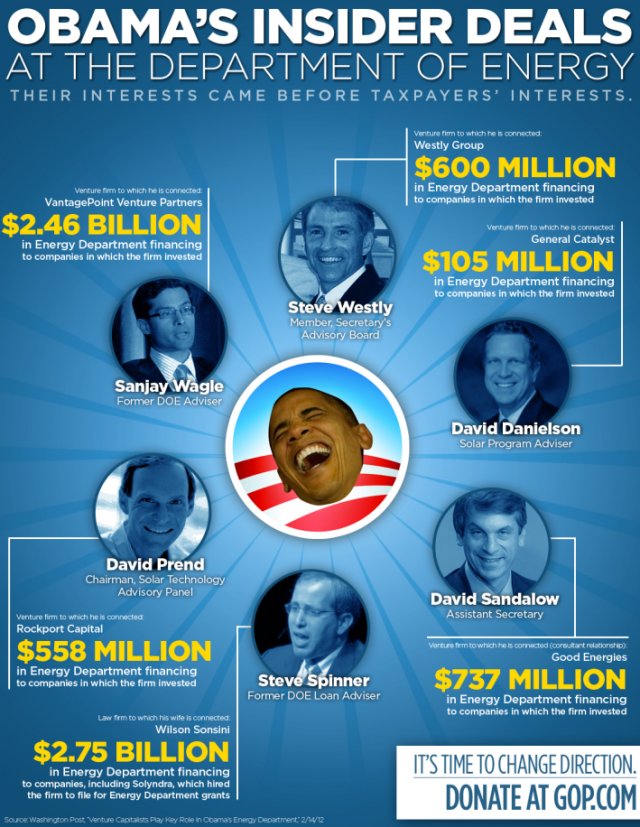 Following an enduring Washington tradition, Wagle shifted from the private sector, where his firm hoped to profit from federal investments, to an insider’s seat in the administration’s $80 billion clean-energy investment program.

He was one of several players in venture capital, which was providing financial backing to start-up clean-tech companies, who moved into the Energy Department at a time when the agency was seeking outside expertise in the field. At the same time, their industry had a huge stake in decisions about which companies would receive government loans, grants and support.

During the next three years, the department provided $2.4 billion in public funding to clean-energy companies in which Wagle’s former firm, Vantage Point Venture Partners, had invested, a Washington Post analysis found. Overall, the Post found that $3.9 billion in federal grants and financing flowed to 21 companies backed by firms with connections to five Obama administration staffers and advisers...

This is raw criminality, plain and simple. People need to go to jail.

"This is raw criminality, plain and simple. People need to go to jail."

Not to worry. Holder will be on the case.

Why in heaven's name didn't they include the amount of money for Obama bundled by each of those men?