It's for the children: Nevada teachers union bosses hit the taxpayer-funded jackpot

Reason number 40 jazillion that collective bargaining must be banned.

In Las Vegas, you don’t have to be a gambling addict to strike it rich. In fact, you only need to become a union boss and the odds are, you too can be a ‘one percenter.’ 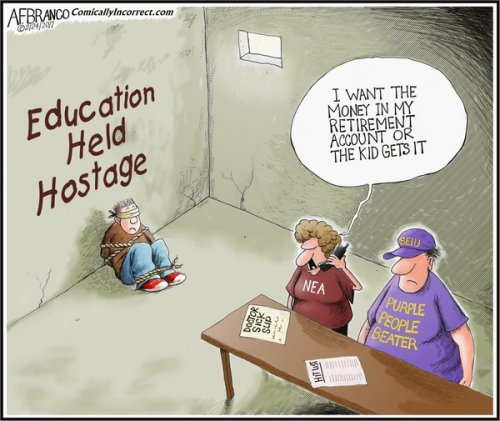 According to the Las Vegas Review-Journal [emphasis added]:

In 2009, the last year for which a required Internal Revenue Service report is available, more than a third of the union’s $4.1 million budget went to pay just nine leaders. Each earned between $139,785 and $208,683 for a total of $1.5 million, according to the Clark County Education Association’s report to the IRS.

John Jasonek, then executive director, got $208,683 for running the union but also received $423,863 from two affiliated organizations — the union’s Community Foundation and Center for Teaching Excellence — making his total pay $632,546.

Unfortunately, unlike the one-armed bandits that line the Vegas Strip, becoming rich as a union boss is a little less random. [Hint: Knowing someone helps.]

And it's for the kids, see?

Taxpayers got plenty of "doh!" when they voted for "O".