James Taranto pounds the final nail into the coffin off the ludicrous contention that Rick Santorum is "unelectable". The last major Republican candidate to receive that kind of label was the "too old", "too crazy", "too stupid", "too conservative", and "too warlike" man named Ronald Reagan.

This column has recently become skeptical of the view--nearly universal on the liberal left but common as well among conservative elites--that Rick Santorum is "unelectable" or far less likely than Mitt Romney to defeat President Obama in November. A new USA Today poll reinforces our skepticism.

The survey, conducted by Gallup, included two samples of registered voters: 1,137 from a dozen "swing states," all of which Obama carried in 2008, and another 881 nationwide. The swing states included six that George W. Bush carried twice (Colorado, Florida, Nevada, North Carolina, Ohio and Virginia), three that Bush carried once (Iowa, New Hampshire and New Mexico), and three that last went Republican in 1988 or earlier (Michigan, Pennsylvania and Wisconsin). 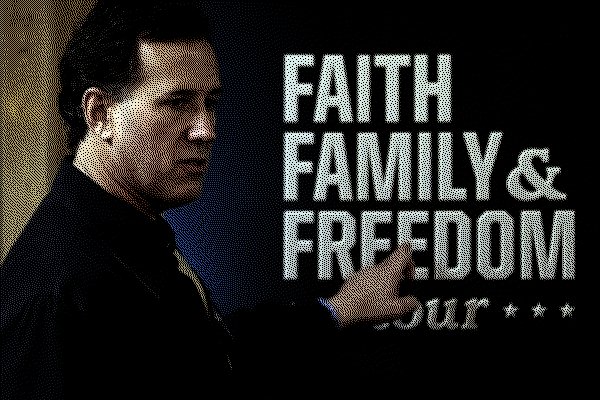 The findings: Santorum leads Obama in the swing states, 50% to 45%, and nationwide 49% to 46%. This gives him an edge of three percentage points over Romney, whose swing-state lead is 48% to 46% and who ties the president nationally at 47%.

To be sure, this is only one poll, and the election is still more than eight months off. One possible explanation is that voters are less unfavorably disposed toward Santorum because they don't know him as well as they know Romney, and that once they learn how hard-core the former senator is on social issues, they'd bolt for Obama if Santorum becomes the nominee.

Writing in BusinessWeek, Bloomberg columnist Clive Crook offers another explanation for Santorum's appeal, while also arguing that it is limited by social issues:

Santorum combines this proletarian stance--unusual in a hard-right conservative--with more familiar elements of GOP populism: patriotism, reverence for family, hard work and self-reliance, hostility to big government, and proud religiosity (to a fault, in his case). If not for the extremism on sexual politics, it would be a potent blend even beyond the Republican Party's social-conservative core.

The trouble with this is that, as we've noted, "the extremism on sexual politics" is in substantial part mythical--and the propagation of the myth doesn't seem to be hurting Santorum. The timing of USA Today's survey (Feb. 14-21 in the swing states and Feb. 20-21 nationwide) coincides with a media hysteria in which the former senator's critics have frequently exaggerated or distorted his views to make him appear more extreme than he is. If he wins the nomination, he will have several months to explain himself to an electorate in which extreme social liberals constitute a small minority. And by that point, conservatives and Republicans who are now joining in on the "extremist" attacks would have an interest in setting the record straight.

Say, I've been out of the country for a while. How'd that Bob Dole and John McCain as "electable moderates" thing work out for the GOP?


Related: Time to Take a Stand

Of course Santorum is no extremist. He's obviously a man of faith with strong convictions. I see nothing wrong with that.

I do however feel his isn't qualified to be president. We don't need a novice president who will likely choose a novice VP.

The only person in this race with the qualifications and record to prove it is Gingrich.

In addition he's going to tell the Saudi's to go pound sand with his 2.50 gal gas video. Check it out.

Cabby, I have no problem support Newt after Rick. But Newt has to be able to pick up more votes than Ron Paul in some of these states.

If he disappoints in GA, he may need to drop out. If so, I hope he endorses Rick.

If you spend a little time perusing Justin Gray's research on the real Rick Santorum - you just might change your mind. Rick is a serial liar and his record shows him not to be a conservative.