Let's Go Back to the Replay: How Bob Casey Beat Rick Santorum in 2006

What happened in Washington? Millions of jobs lost. The largest deficit ever. An arrogant government out of touch. "Pennsylvania deserves a senator in touch with Pennsylvania... we need someone fighting for fair-trade laws, that don't give away our jobs... someone who will stand up against the partisan politics in Washington... someone who's fiscally responsible... who balances a budget, just like you do, every day of your lives. We can do better in Washington, and we will. I'm Bob Casey, and I approve this message." --Transcript of Bob Casey, Democrat for Senate Ad, 2006 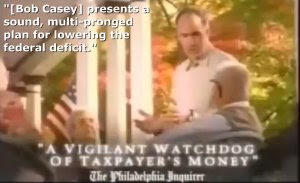 The midterm elections held on November 7, 2006 resulted in a massive victory for Democrats, allowing them to capture the House, the Senate, and a majority of state legislatures and governorships from the GOP.

Senator Rick Santorum was one of the victims of the sweeping Republican loss, falling to Bob Casey by a double-digit margin.

Wikipedia describes some of the major reasons for the national power shift, which included "the decline of the public image of George W. Bush, the dissatisfaction of the handling of both Hurricane Katrina and the War in Iraq, Bush's legislative defeat regarding Social Security Reform, and the culture of corruption, which were the series of scandals in 2006 involving Republican politicians."

As for Santorum himself, The Washington Examiner notes that: 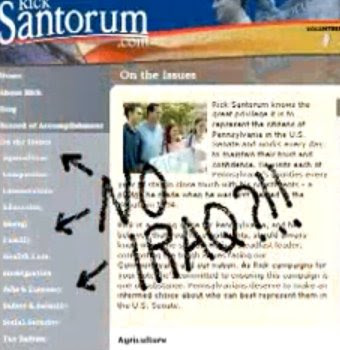 The biggest policy reason for Santorum's loss was his outspoken support for the war in Iraq. By November 2006, the war was going badly and threatened to turn into a full-scale catastrophe. President Bush resisted calls to change course and had not yet settled on the troop surge that would ultimately rescue the situation from disaster. While Santorum's Democratic opponent, Bob Casey, called for a different course, Santorum stuck with the president, and with the war.

"As other Republicans attempt to steer away from Iraq and terrorism, Sen. Rick Santorum argued yesterday that America must stop 'sleepwalking' while 'evil enemies' plot the nation's destruction, making foreign policy a focal point in the final days of his campaign," the Philadelphia Inquirer reported on October 27, 2006. Santorum made the finale of his campaign into a so-called "Gathering Storm" tour, in which he mixed support of the war with calls for continuing vigilance in the war on terror. In making the war such a central part of his campaign, Santorum stubbornly kept the focus on the weakest part of his candidacy.

The voters clobbered him for it. In Pennsylvania exit polls, 61 percent of voters said they disapproved of the war. Santorum lost among them, 15 percent to Casey's 85 percent. Among the largest sub-group of war opponents, the 42 percent of voters who said they strongly disapproved of the war, Santorum lost seven percent to 93 percent. That by itself was enough to doom any hopes for a third term.

That Mitt Romney criticizes Santorum for losing an election -- primarily for his support of the Iraq 'Surge' that the Massachusetts Governor also backed -- is disingeuous at best. Romney didn't run for reelection in 2006. 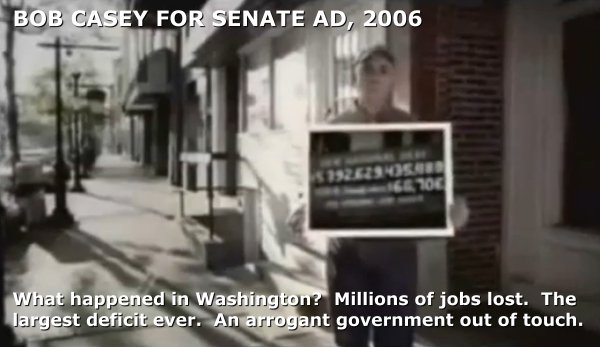 ...Had Romney accomplished the majority of the “100 things [he] wanted to do” in office, or enough of them to be satisfied? Had he decided, at that point, to run for president in 2008 and that the best way to do that would be outside the governor’s mansion in Boston? Or had Romney looked at the poll numbers, which were declining throughout the second half of his term (he was spending a lot of time in Iowa and New Hampshire around then), and concluded that he couldn’t win reelection against a popular Democrat?

A review of Bob Casey's television ads paint a clear picture of his approach to defeating Santorum. In short, he ran to the right of Rick Santorum, promising: 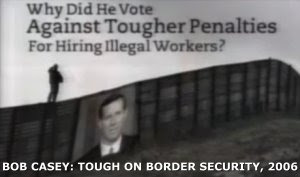 Bob Casey beat Rick Santorum in 2006 the way all Democrats win in the rational 46 states (California, Hawaii, Illinois and New York not included): He lied. He lied early, often and about everyone and everything.

How's that working out for you, Pennsylvania?

The Casey game-plan for victory over Santorum has about as much relevance for the Obama campaign as salads have for Michael Moore. Which is to say: none at all.

I've noticed Drudge has been posting the anti-Santorum posts like crazy.

Well done, Doug. Let's not forget that Rick Santorum was the poster boy stand-in for the Republican congress against whom the Democrats were running.

They poured lots of money into PA in order to help Casey and crank out negative ads against Santorum.

1 - if there had not been a recession and if he'd NOT been outspent 8-1 then mccain would beaten obama badly.

2 - santorum lost in his home state and decided he'd rather be potus then challenge casey again.

gee: i wonder why?

#1) Your point makes no sense to me..Apples to Oranges. It doesn't matter, Obama won. Romney LOST to McCain. That's my point.. TO FRIGGIN McCain.. Good Grief.. Think about it.

While I'm well aware of how O got elected, McCain was his worst enemy. Be honest. Still doesn't explain why Romney LOST to him. My Dad always told me 2nd place is FIRST LOSER... People don't relate to him, well most don't.. You obviously do.

However, I voted for McCain and would vote for belly button lint over the "One."

#2) Tell you what... You think they are making Santorum into a religious nut, you better check out Mormonism (who by the way, share the same social issues. Romney is just keeps quiet about it. But that doesn't show any leadership to me). Maybe you are one, none of my business. If you don't think they will have a field day with it.. Good on you.. They have been preparing for Romney for years. I already heard The View talking about his Granddad from Mexico. It's going to be ugly.

Obama and his $1 billion wrecking crew are going to DESTROY Romney over it. Not to mention he takes Obamacare OFF the table. And don't think they don't know it.

I'm not thrilled with any of the folks running. But if you think middle America is going to understand Romney, his healthcare plan that Obama claims they used as a guide... his millions, and his religious faith, coupled with whatever else the Obamas' crew digs up... I don't think he has a chance. And if you think those getting benefits for not working are going to understand him,, Well.

To be honest, I have a very sick feeling that no matter who runs the O is going to win. People I talk to still have NO clue what is even going on in this country. So, to you and to Doug, thanks for keeping the flame burning. But I don't understand your views here.

And at this point, it's still early. May the best person win and go on to win. I'll vote for whoever it is..

Oh, I don't know... cause POTUS has better toys?

Also, do not forget that Casey pretended to be a prolifer and relied heavily on his legendary late father's legitimate prolife record.

Then Little Bob supported ObamaCare. What a tool.

You're right, Doug. Bob Casey's victory was based entirely on a pack of lies.

In the past on this site, Doug has several times made the case that Santorum draws the clearest, most distinct ideological differential from Obama and the democrat party at large. If Santorum can effectively communicate this differential, I believe he can easily win the election.

Lie early, lie often, lie always is how dhimmierats get elected. Unfortunately there are some like Reliapundit who cannot differeniate between these lies and actually believe a candidate as weak as McCain had a chance. Now he pimps for Romney.

One day someone will explain to me what Romney has done to make him a worthwhile presidential candidate.

Was it his impressive formation of successful and innovative businesses?

Very nice analysis to show up the meme's the Romybots are pushing.

We definitely need to dig up that Casey anti-santorum video!

If Santorum wins and the left starts painting him as an extremists we can nutshot them with their own video.

After linking to that video the only question would be:

"Were Democrats falt out lying then or are they lying now?" I cant wait to spam that video hundreds of times.

"Be honest. Still doesn't explain why Romney LOST to him. "

Saw your post elsewhere. " A vote for Santorum is a vote for Obama."