You can't make this crap up:

JIZAN – A Hai’a security inspector has been fined SR3,000, six weeks in prison and 120 lashes for marrying more than four women and breaking residency laws. The Hai’a is the Commission for the Promotion of Virtue and Prevention of Vice. 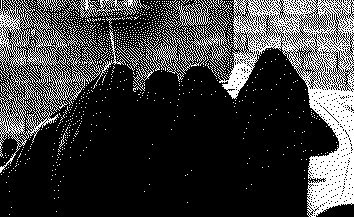 He married three Saudi women, who are on his identity card, two non-Saudi women who don’t have Iqamas and a non-Saudi who has an Iqama...

It is against Islamic law for a Muslim man to have more than four wives at one time.

...The Administrative Court at the Jizan Board of Grievances in Uhud Al-Masariha gave him 120 lashes for marrying more than four wives... He was also ordered to memorize certain chapters of the Holy Qur’an and study their interpretation. He was also banned from traveling abroad for five years, delivering a speech in the mosque and leading prayers in the mosque.

System Error: No Snark Available At This Time.

at 9:27 PM
Email ThisBlogThis!Share to TwitterShare to FacebookShare to Pinterest
Labels: extremism, World

Isnt having more than one wife punishment enough all by itself?