"National Journal" (if that is its real name) is a political analysis website that appears to get its content from the deepest crevices of the far left Beltway machine. Its latest hilarious missive is entitled "FACT CHECK: Gingrich Claim on Obama Infanticide Vote A Stretch":

Obama did not vote to legalize infanticide, and the media did not ignore the issue.

In answering a CNN debate question about birth control, Newt Gingrich lashed out at the media for giving President Obama a free pass during his 2008 bid.
“Not once did anybody in the elite media ask why Barack Obama voted in favor of legalizing infanticide,” Gingrich said.

Gingrich was presumably referencing Obama’s opposition to Illinois’ proposed version of a “born alive” law, intended to require doctors to administer immediate medical care to any infant that survived an intended abortion.

According to Politifact [Ed: Politifact, far from the unbiased arbiter it pretends to be, is a provably left-wing outfit] ... Obama voiced his opposition to the new legislation as a state senator because it would have given legal status to fetuses and would thus have been struck down by the courts, and because Illinois already had laws to ensure infants who survived abortions would be given medical attention.

This is, to put it in terms progressives can understand, horsecrap. 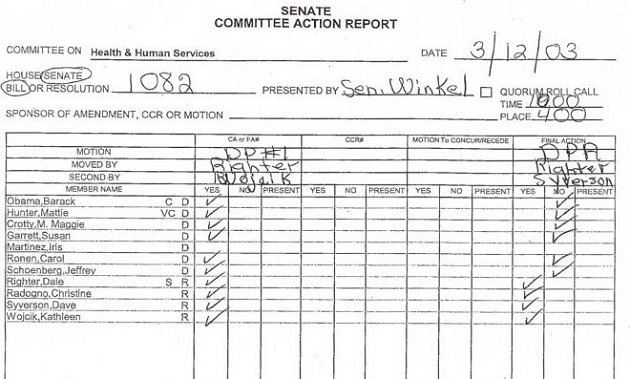 And during the 2008 debate over Obama's votes, the media was in full spin mode to protect their beloved candidate:

In summary: the National Journal's "FACT CHECK" (capitalized to make it extra believable!) is just as legitimate as Politifact. Which is to say, it's just a skosh to the left of Sean Penn.

alpos fsheraWell, see - if National Journal had only checked Politifact's fact check Of Santorum's "pants on fire" lie (hyperbole), “Any child born prematurely, according to the president, in his own words, can be killed” they would have found the truth. Politifact actually buried it in that post at the end: Back in 2008, we requested documentation from the Illinois State Archives about the 2003 bill and found that it did have a neutrality clause, as the National Right to Life Committee said. (The clause was added at the committee level, and those records are not available online. But we have posted the documents we received via fax from the State Archives here).