But, Melvin, he's the only one who can win! 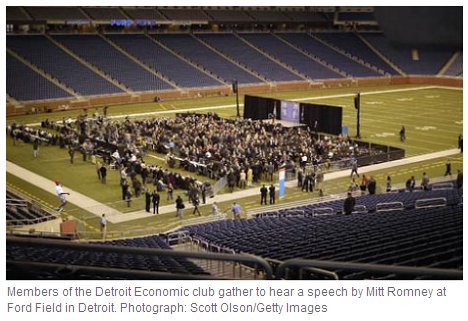 Romney opened himself up to derision for choosing a 70,000-seat stadium which attracted just over 1,000 people, many of them school children bussed in to help fill out the crowd, tucked into a corner of the astro-turf pitch.

The small crowd underlined again his inability to draw large numbers of supporters and to excite the conservative base.

The speech too turned out to be a flop. Having been hyped by his campaign staff all week, Romney had little new to say... ...Political opponents quickly waded in. Obama's campaign adviser, David Axelrod, in a tweet, wrote: "Judging from pictures, looks like Mitt pinned himself in inside the 20."

After delivering his speech, Romney made a throwaway remark about cars that will be replayed when the speech itself will have been long forgotten.

In an attempt to ingratiate himself in the motor capital of America and undo some of the damage caused by a call in 2008 to let the car industry go bankrupt rather than be bailed out by the federal government, he listed cars owned by himself and his wife Ann.

He would be a president who loves cars, he said. "I like the fact that most of the cars I see are Detroit-made automobiles. I drive a Mustang and a Chevy pick-up truck. Ann drives a couple of Cadillacs, actually. And I used to have a Dodge truck, so I used to have all three covered."

Look, I think it's great Romney's rich. I love the fact that he's successful. But, hell, don't give the opposition easy soundbites!

Speaking of which, Rick Santorum was interviewed by Mark Levin tonight; the Right Scoop has the audio of the complete interview.

Have I mentioned that I support Rick Santorum for President?

the guardian article gets many facyts wrong.

the org sponsoring the event had overflow crowd rsvps and had to move it to a larger venue at the last minute and the stadium was available.

they never expected a stadium-like crowd.

doug, by portraying it that way you are carrying water for the left.

it's not unlike newt's attacks on capitalism/mitt.

mitt is the only capitalist in the race.

rick and newt are career politicians/lobbyists/earmarkers.