In Brooklyn, Queen's and Staten Island, beleaguered residents prepared for a seventh day without power. And many have been forced to "scavenge for food like animals":

...residents of the Rockaways in Queens continued struggling without power, heat or food for a sixth day as their neighborhood slowly descended into chaos. 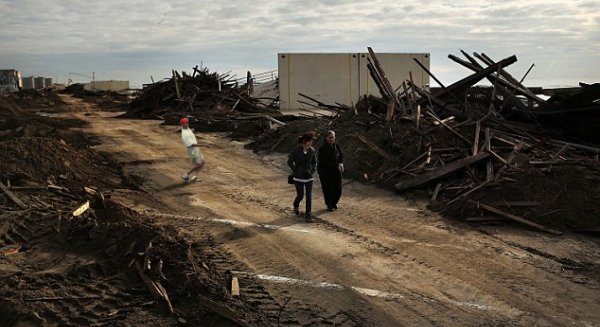 With little police presence on the storm-ravaged streets, many residents of the peninsula have been forced to take their protection into their own hands, arming themselves with guns, baseball bats and even bows and arrows to ward off thugs seeking to loot their homes.

It has been reported that crooks have been disguising themselves as Long Island Power Authority workers and coming by homes on the peninsula in the middle of the night while real utility workers were nowhere to be found. 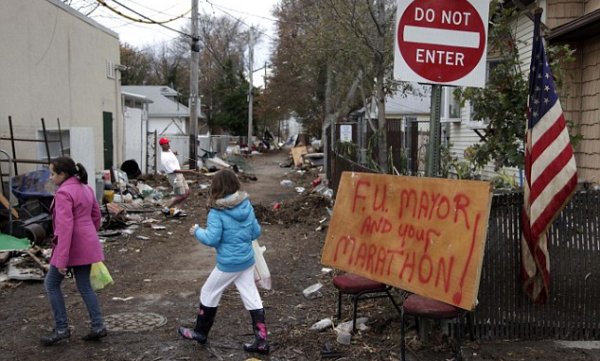 ...'We booby-trapped our door and keep a baseball bat beside our bed,' Danielle Harris, 34, told the New York Daily News... The woman added that she has been hearing gunshots likely fired in the nearby housing project for three nights in a row... Meanwhile, local surfer Keone Singlehurst said that he stockpiled knives, a machete and a bow and arrow...

Most of the grocery stores in the area have not reopened since the storm, and the neighborhood has been left cut off from the rest of the city, with no trains or even shuttle buses servicing the residents... the Red Cross and FEMA were still nowhere in sight... The Borough President of Staten Island called the reaction of Red Cross - or lack thereof - to the devastation caused by Sandy an 'absolute disgrace'... 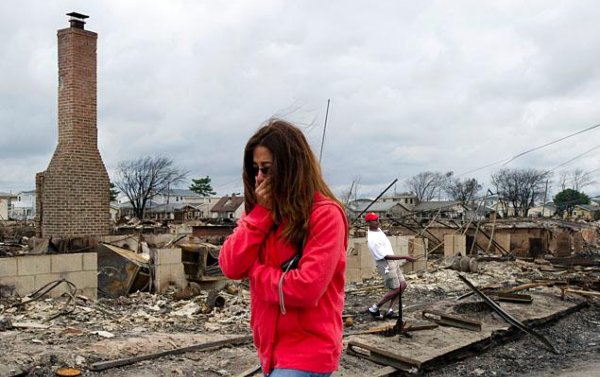 'My advice to the people of Staten Island is do not donate to the American Red Cross,' said Mr Molinaro. 'Let them get their money elsewhere... It's an absolute disgrace in a county that has always responded to disasters all over the world... Katrina - we sent them down four trailer loads of food, water and one trailer load of generators. No one's responding to us... Of the 22 people across New York City that have perished, 15 of them died in Staten Island. The borough is still underwater.’

...In a Coney Island apartment block, where tenants huddle together in one room and human waste spills out of the toilet, tenant Jeffery Francis despairs that help is not getting to Brooklyn faster.

In what has become a ritual, the president did not deign to answer questions about the humanitarian crisis unfolding in the Northeast.

Answering questions is for mere mortals, it would seem, not an iconic cult figure bent on retaining his white-knuckled grip on power.

This disaster and the one in Benghazi should be the wakeup call that all of the people who voted or are going to vote for Obama to get rid of him. This is not being reported by the state controlled media at all. Just wait for the next disaster, when Mitt Romney is President; the media will be out in full force screaming for a tar and feather party

Why do all three of these pictures have that man in a strange position with a red hat on?

Well, we'll, well....
After years of voting for liberal, socialists and communists the chickens are coming home to roost.
Excuse me, hahahahahaha...
Enjoy your socialist hell and big government help and remember, no drinks over 16oz.

to all hurt by this war in the heavenlies.

fix your eyes upon Jesus. Look full in his wonderful face. And the pains of earth will grow strangely dim, in the Light of his Glory and Grace.
http://www.youtube.com/watch?v=5C3t-ZoWgXA

" Anonymous Anonymous said...
Why do all three of these pictures have that man in a strange position with a red hat on?"

Obama should have announced that he was going to cease campaigning and spend all his time with the storm issues. It would have gotten more votes than anything else. Of course that would have never occurred to this selfish president. It's what G. W. Bush would have done.

It's just Mayor Mike giving New Yorkers a taste of what his "solutions" to Global Warming will bring.
That's why he said he endorsed Obama.

Having Obama photoshopped into these photos is kinda strange and oddly appropriate. FORE!