NEVADA VOTE-FRAUD SCANDAL: Union registering non-citizens to vote, dragging them to polls, and forcing them to vote Democrat

I thought vintage media and the Democrat Party (but I repeat myself) said that there was no proof of systemic vote fraud?

Perhaps they should inform Glenn Cook of the Las Vegas Review-Journal: 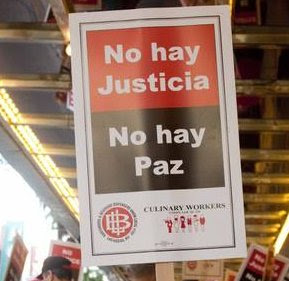 Voter registration fraud is not a groundless conspiracy. It is not a hypothetical threat to election integrity.

In Nevada, a battleground state that could decide the presidency and control of the U.S. Senate, it is real.

Last week, I met with two immigrant noncitizens who are not eligible to vote, but who nonetheless are active registered voters for Tuesday's election. They said they were signed up by Culinary Local 226... [As] the election drew closer. Then the Culinary canvassers started seeking them out and ordering them to go vote.

One of the immigrants was visited at home by a Culinary representative and said the operative made threats of deportation if no ballot was cast.

...After a few days of early voting, the union knew the immigrants still hadn't voted. So union canvassers kept visiting.

One day, when a Culinary representative was told the immigrant wasn't a citizen and wouldn't vote, things got testy. The immigrant was "in so much trouble," the Culinary operative said, according to Brenda Moraine, a local immigrant advocate who was there... They're afraid of reprisals from the union, they're afraid of losing their jobs, and they're concerned that their signatures are on a government document [could lead to perjury charges]...

I verified their identities, their lack of citizenship and their status as active registered voters in Clark County... One of the immigrants validated my worst fears about Nevada's weak voter registration standards and voting safeguards...

"There are others," the immigrant said.

Other noncitizen Culinary workers are registered to vote? 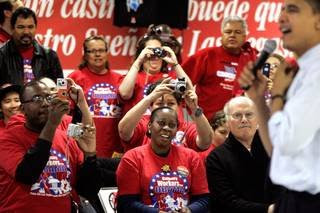 ...how many of these ineligible voters have done the Culinary's bidding and submitted ballots, whether out of ignorance or fear, and how many have the knowledge and courage to follow the law and stay away from the polls[?]...

In Nevada you never have to prove you're a citizen to register to vote or cast a ballot. Forget about showing government-issued photo identification at the polls, as several states now require. You don't have to show a photo ID at any point in the process. The immigrants I met could vote Tuesday just by showing a Culinary health insurance card and a power bill.

...I spoke with Yvanna Cancela, political director for the Culinary Local 226, on Friday about what these immigrants have experienced... Cancela asked me to identify the workers so the union might be able to learn which Culinary canvassers had made contact with them and who had registered them to vote. When I said I couldn't under the terms of my interview with the immigrants, she added that if they came forward, the union would take corrective action against those canvassers to make sure they understood the law...

Cancela did not know how many noncitizens are represented by the Culinary Local 226...

Earlier columns by Glenn Cook outlined how Nevada mails voter registration invitations to noncitizens, felons and the dead and how it facilitates vote fraud through ultra-lax identification requirements.

As Cook observes, Nevada's system makes it "exceedingly easy to cheat and gives political parties and politically active groups a powerful incentive to break the law without much risk of being caught."

But don't worry: I'm sure Eric Holder will launch an investigation any minute now.

If Barry Odinga wins this one it will only be through voter fraud. The Republic will not survive another 4 years of subterfuge. With DemocRATS lining up to jump off the fiscal cliff we will be able to see the future and then it will be every man for himself.