Mama B and I saw 42 last night and it was a wonderful movie. It brought to mind my early memories of baseball and my first encounter seeing Jackie Robinson. 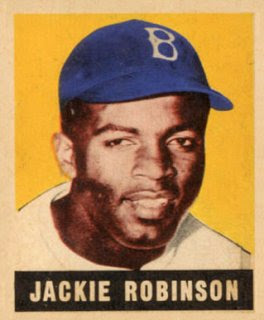 In 1944, we were living in Rogers Park in Chicago in an apartment on Sherwin Avenue next to Lake Michigan. I was 7 years old and fell in love with a girl named Jill Weintraub who lived in a house on the corner. You must understand how unusual this was. There were almost no houses in Rogers Park. Everyone we knew lived in small apartments in apartment buildings.

But Jill lived in this huge corner house and I was truly impressed. It turned out that her father was Phil Weintraub, a first baseman for the New York Giants. During the war years, many of the baseball stars (Williams, Musial, Feller, etc.) were in the military. In fact, Ted Williams was a pilot and served in three wars if memory serves. Because of the loss of their stars, teams seriously considered discontinuing baseball but fortunately they reconsidered and staffed the teams with many "has-beens" and "never will be's".

Phil Weintraub was a better than average player and had some pretty good stats. As I recall, he took me (with my girl friend) to my first game, where the Giants faced Cubs. As an aside, in those days, players made very little money and all worked in winter jobs. Phil worked for Kraft Cheese and after the war, when everyone returned, he lost his job to Johnny Mize, and moved to LA with Kraft and took my girlfriend away.

I started going to games regularly in 1947. From 1947 to about 1953, I would see 40 to 50 games a year, all at Wrigley Field. In 1946, we had moved from Rogers Park to Highland Park and I would take the North Shore from Highland Park to Howard Street, change to the “EL” and take it to the ballpark.

The total cost of the day was about $1.25 and I earned the money by mowing lawns for neighbors when the Cubs were on the road. Also, remember that the Cubs only played day games. They were a pathetic team but they were my heroes: Phil Cavaretta, Bill Nicholson, Don Johnson, Eddie Waitkus (“The Natural”) and many other mediocre players.

In those days, the Cubs drew maybe -- I don’t know -- maybe 4,000 or so in attendance. I had the cheapest bleacher seat at .50 and would sit behind the dugout. I knew every player in the league because they were all so close. I knew every batting stance and when I played (which I did almost every day) I would replicate their batting stances. And I was never without my “Who’s Who is Baseball” so I knew all the stats.

In 1947, there had been no mass migration of the Black population from the South. The only Black people I knew were the maids we had who were truly family members. 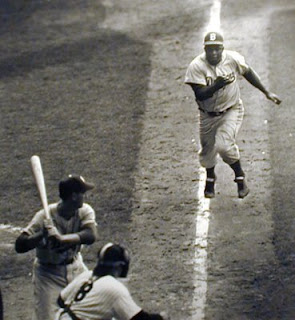 That summer, the Dodgers came to town in June as I recall and when Jackie Robinson came up to bat, he was greeted with hoots and terrible verbal abuse.

The worst was Charlie Grimm, the Cubs Manager who I could see standing up on the dugout edge uttering the worst words, most of which I had never heard.

I could not see the Cubs players in the dugout but I could hear their cursing and abuse.

But... Jackie Robinson was electric! He was an athlete -- a four-letterman at UCLA -- and he looked like an athlete, unlike most of the players who frankly were soft (remember, this was before any serious conditioning began).

Anyway, when he got on first base, he changed the game. His energy... his excitement... his movement... he gave the game energy.

In 1947, he stole 29 bases for the year. That may pale in comparison to subsequent base-stealing champs, but understand: in those days, an entire team might steal 20 bases for the year. 29 steals was amazing then, especially because he threw off the concentration of the pitcher.

He truly altered the tenor of baseball. I saw him play maybe 12 – 15 times and he never failed to excite me and everyone else. What he accomplished with the adversity he faced will always remain a truly great accomplishment. And Branch Rickey who was the “prime mover” and Dodgers owner was amazingly courageous.

Sorry about the length of this but the movie brought back so many memories and recollections of “yesteryear” and a different world.

at 7:38 PM
Email ThisBlogThis!Share to TwitterShare to FacebookShare to Pinterest
Labels: Sports

Great story-I was a next wave of Cubs fans-lived Cubs growing up, went to my first game at Wrigley and man when I walked up from the concourse and saw how green the field was, it blew my mind-I had only seen games on black and white TV-I went to HS in Evanston and many was the time I cut school to walk down to the el and ride over to Addison. By than, bleacher seats were a buck but still for a couple dollars, you could ride down there, get a hot dog and watch.

Didn't see Robinson but we had Banks, Williams, Santo, Beckett and Hobbs-we also TRADED Lou Brock agghhhhhhh to the hatred Cardinals and Leo the Lip as manager

It was heaven.
MM