In the era of social networking, the power of the complaint letter can be mind-boggling:

This was the week when Virgin Media was forced to grovel publicly after a deceased man's family posted the firm's demand for a £10 "late payment" when his direct debit was denied because of his death. 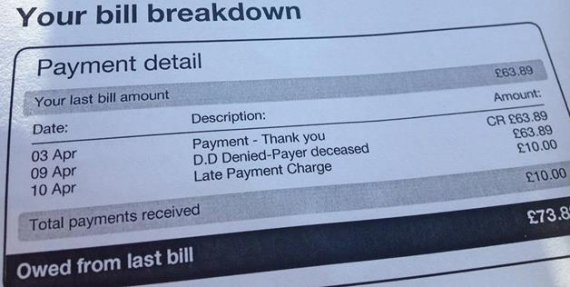 The new bill clearly states that the direct debit was denied because the payer was deceased, but that didn't stop Virgin from tacking on the late fee. The man's son-in-law, Jim Boyden, posted a picture of the bill on Facebook, which has since gone viral, and had a few choice words for the telco:

I'm really sorry for my father-in-law not paying his bill last month, but what with him being dead and all, it's probably slipped his mind. Some people, eh?

You, however, are to be publicly commended for swooping in with all the sensitivity of a charging rhino and instantly fining him an extra ten pounds for having the unheard of nerve to be dead and therefore being unable to pay you (some people really have no idea of priorities do they? It's your profit first, THEN anything else. The cheek!).

Boyden added that whatever his father-in-law is up to in the afterlife, watching TV on his Virgin subscription probably wasn't on the list:

I might pay it if you can prove to me he's been watching any of your channels in heaven, but given that British Sky Broadcasting is beamed in directly from the clouds I think he's much more likely to be enjoying that. Your infernal cable pipes seem only to come up from the ground (same location as Hell - spooky coincidence) where I imagine you train people in the art of customer service.

I am bitterly disappointed in your attitude, probably automatically generated by machine and unchecked by any caring human heart. The only saving grace is that my father-in-law had an excellent sense of humour and is probably laughing his arse off about this as we type, giving you the Vs, waving ten pound notes around, planning to haunt you and enjoying the content of Sky TV.

Virgin has since apologised and refunded the charge.

at 7:56 PM
Email ThisBlogThis!Share to TwitterShare to FacebookShare to Pinterest
Labels: eBusiness

So that's where AT&T got their idea of "customer service"