THAT MUST BE ONE BORING PREACHER: 7-year-old boy steals dad's car to avoid church

If this kid applies as much energy to his schoolwork, he's gonna be one successful dude.

Police in Utah were in for a shock when they spotted an erratic driver recently. After following the white Dodge Intrepid for a spell, the pursuing officers watched as the driver parked the car, jumped from behind the wheel and ran into his father's house. Standard fare, you say? Not quite. 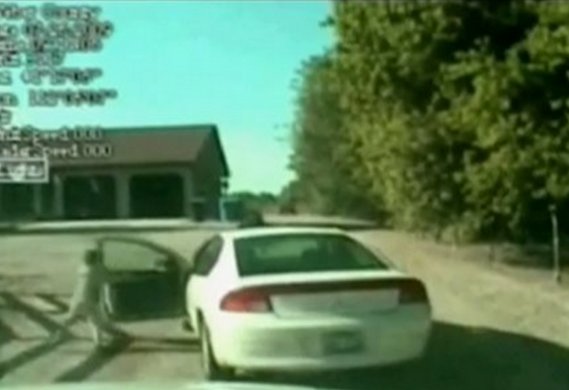 The driver was actually a seven-year-old boy who had pilfered his dad's keys to skip out on going to church. The officers opted to let the parents handle disciplining the youngster rather than subject him to the legal system, but cautioned the dad to keep his car keys in a more secure location in the future.

You can check out video from the chase for yourself... The police say the kid did a pretty good job of keeping the car under control, but did run one stop sign. As Ricky Bobby would say, "I wanna go fast."

How come girls never engage in these kinds of capers? Why is it always boys?

at 7:29 PM
Email ThisBlogThis!Share to TwitterShare to FacebookShare to Pinterest
Labels: Autos, Crime

These kids are growing up fast nowadays. I didn't do that until I was 11 or 12. As to why boys? We are lucky that way? More fun, die younger, and I'll take it meself.

I have news for you--girls DO engage in these kinds of capers. I spent a night in jail when I was sixteen for trying to out-run a police car. And that was fifty years ago.

Come to think of it, maybe we were wilder back then. Is that possible?