Standing in a River of Children's Blood

I refer not to the modern-day Mengele named Kermit Gosnell but instead to the loathsome, disgusting, hack Senator from Connecticut named Richard Blumenthal.

The [Newtown shooting] issue took a disgusting political turn on Thursday, though, when U.S. Sen. Richard Blumenthal, D-Conn., used Sandy Hook to raise money. The money is not for one of the relief funds set up to help victims’ families, or to fund mental health services, or to support autism research. 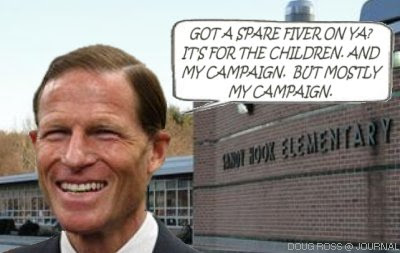 “In the wake of the horror of the December 14, 2012, massacre of 20 beautiful children and 6 dedicated educators,” Blumenthal is asking supporters to send money to his 2016 re-election campaign!

“As your senator, I will continue fighting for the rights of all the people, not the special interests. But I need your help,” Blumenthal wrote in an email to supporters Thursday morning. “Please contribute $5 now as the Senate debate continues on common-sense gun reform legislation this week.”

Constant fundraising and the recent trend of fundraising off real-time reaction to the news of the moment have officially jumped the shark, courtesy of Blumenthal’s tasteless auto-appeal.

Senators are elected every six years in part to give them some time to legislate without an eye on the next campaign. But the campaign – and its drive for money to buy elections – is constant.

There are lots of ways and lots of time for Sen. Blumenthal to raise money for his re-election campaign before 2016.

Using the “horror” of the “massacre of 20 beautiful children” at a time when critical legislation honoring their memory is at stake to beg for $5 for your next political campaign is as tasteless as it gets.

After the controversy erupted, Blumenthal did not apologize. He actually defended his abysmal behavior.

These mutant politicians are the lowest of the low.

oily, no soul, and a serial liar about serving in Viet Nam. Is he related to our Sec'ty of State?
Frank G

Exactly what one would expect coming for a lowlife who was confused [for years] about serving in Vietnam. Then was given a pass on it by the voters.