Nostradumbass: Paul Krugman on the Euro

But first, a little context-setting: Walter Russell Mead describes the current reality in Europe as the dream of a single currency unravels at an ever-increasing pace: 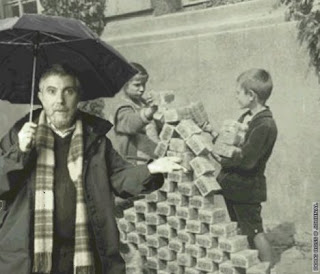 ...For the eurozone to survive as it now stands, house prices, wages, the cost of meals in restaurants, groceries, and so on would all have to fall by as much as 50 percent in the periphery. That can’t happen without massive losses to banks, which have lent money based on current price levels. These loans cannot be repaid if prices fall that far. And this kind of price adjustment also means massive unemployment, probably dragging on for many years...

...this situation means that Europe’s single currency has in effect already failed. €300,000 in Germany is not the same as €300,000 in Italy or Spain, and there is no way to equalize values without years of wretched and ruinous pain.

There are lots of consequences, but the one that may cause the most trouble fastest has to do with banking. If a Spanish euro is really worth much less than a German euro, sooner or later bank deposits in Spain are going to be worth less than bank deposits in Germany. Intelligent people will realize this and start moving their bank deposits out of Spanish banks and into German or even non-eurozone banks; those who fail to do this stand to lose a lot of money when the system finally snaps...

And now is the time when we juxtapose! Mr. Peabody, set the Wayback Machine to January 7, 2002 and turn the channel to The Nightly Business Report, where The New York Times' Paul F. Krugman offered the following commentary:

So now Europe has a single currency. Should Americans care? At first, the euro won't make much of a difference to you and me. Vacations in Europe will be a bit easier to arrange, but they will also be a bit more expensive because the arrival of euro notes will give the currency a boost.

It will take years, maybe decades, before the impact of the euro really hits home. But then it will rock your world. The euro, you see, isn't mainly about economics...

For Europe's economy is as big as America's; Europe's technological sophistication is a match for our own; Europe's population is by and large better-educated. What that means is that soon, for the first time since World War II, we will face a political and economic equal - not an enemy, but another power that offers an alternative model of how a modern society can and should be run.

Europe shares many of our values, including a deep commitment to democracy. But it also disagrees with us about some things, including the appropriate level of taxes and social benefits. Until now, we haven't had to take those differences seriously; we were a superpower and they weren't. Now that may change, and I think that's all to the good. I love big, multicultural democracies; I love them so much I want to see two of them, so we can learn from each other. Viva la difference! I'm Paul Krugman.

But not to worry, gentle readers. Despite his train-wreck of a record -- including Enron and the "Housing Bubble", to name but a few -- Krugman can predict with absolute certainty the inconsequential ramifications of massive sovereign deficits as well as the dire environmental catastrophe that awaits us because of... Carbon Dioxide.

At least that's what passes for the intelligentsia on the Left would have you believe.

Intelligent people will realize this and start moving their bank deposits out of Spanish banks and into German or even non-eurozone banks just to secure their money.