BEL AIR, Md. – A burqa-wearing man pretending to be a woman is in police custody after an armed robbery and dramatic police chase Friday afternoon. 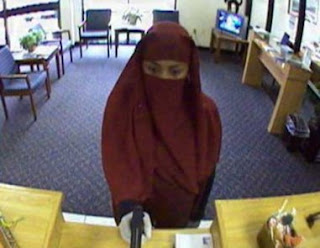 Police say around 3 p.m. Harford County Sheriff’s deputies were called to Third Base Liquors on South Fountain Green Road in Bel Air for a report of a robbery. When officers arrived witnesses told them a man wearing a burqa covering his entire face except for his eyes entered the store and asked the clerk about beer.

Police say the man altered his voice to sound like a woman and chose a case of beer. As the clerk leaned over to pick up the beer the fake lady flashed a gun and announced a hold up.

The clerk gave the burqa-wearing female impersonator an undisclosed amount of cash and the robber left the store and jumped into a white SUV.

Police say an alert passerby noticed something strange, copied down the tag number and reported it to authorities. A short time later police saw the SUV on Rt. 40 at Rt. 755 in Edgewood and attempted to stop it. As the Divine wannabe fled west on Rt. 40, he clipped a car and lost control. The man was critically injured and taken to Shock Trauma for treatment.

The driver has not yet been identified and detectives are investigating if this robbery was connected to an armed robbery that had occurred earlier today in the 2400 block of Churchville Road in Bel Air. Witnesses in that case also reported a white SUV as a suspect vehicle.

OT: why no threads with hundreds of comments here, Doug? SRSLY? I need to spread the word, and I shall.

Pamela Geller, 4 days ago, speaking about Jihad and Boston.

The best speech since the mid-to-late 1700s, and of the gravest importance.

Myself being a Radical Methodist !!