Question: it can't be called incompetence if Eric Holder's sabotaging the case against the alleged Boston Marathon bomber on purpose, right? I only ask because Holder has a serious conflict of interest: his old law firm is one of the biggest defenders of terrorists at Gitmo, but as A.G. he's supposed to be prosecuting those very same Jihadists.

Investigators have found female DNA on at least one of the bombs used in the Boston Marathon attacks, though they haven't determined whose DNA it is or whether its presence means a woman helped the two brothers suspected in the bombings, according to U.S. officials briefed on the probe.

In another development, Russian officials revealed details about contacts between the older brother and suspected Islamist radicals in the Caucasus, including Internet exchanges that led to concerns by investigators that he was trying to join up with jihadist fighters... 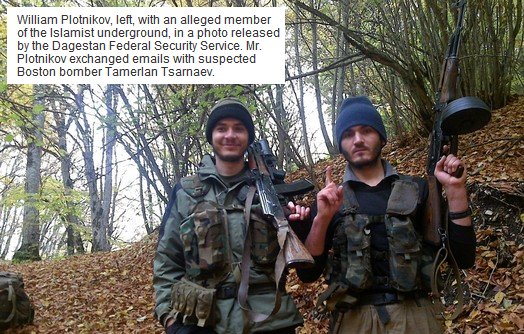 ...Two Russian government officials said Tamerlan Tsarnaev exchanged notes over the Internet with William Plotnikov, a boxer who moved with his parents from Russia to Canada before joining militants in the North Caucasus. And they said Mr. Tsarnaev met several times in early 2012 with Mansur Makhmud Nidal, an alleged militant from the Russian province of Dagestan and suspected jihadist recruiter. The meetings happened in a mosque in Dagestan's capital of Makhachkala known for its adherence to a puritanical strain of Islam, they said...

...Mr. Nidal died in a firefight in Makhachkala last May after a five-hour standoff that ended with him throwing a grenade at police officials, according to Russian authorities. Mr. Plotnikov died two months later, in mid-July, during a raid in the hinterland of Utamysh, a village southwest of Makhachkala.

Mr. Tsarnaev was in the region at the time of both raids but left Russia for the U.S. three days after the second one. He left before picking up a Russian passport that had been prepared for him at the local migration office in Dagestan's capital.

"He intended to join the fighters, but he lost his contacts," one of the Russian officials said. "In the end he picked an easier enemy in Boston."

Well, it's a good thing Holder Mirandized the (*cough*) "alleged" bomber before his connections could be fully explored. After all, he was talking to investigators until then.

Makhachkala? Utamysh? My new immigration policy suggestion--show the city of origin to a random American Idol contestant. If he can't pronounce it, application denied. Sure, we will exclude some good people that way, but if it saves the life of one innocent child, right?