If there's an award for real investigative journalism, this year Judicial Watch should win it hands down. Its investigations into rampant criminality by the Obama administration culminated this week with a truly appalling revelation: the White House and the Mexican government are working together to rip off the American taxpayer.

(Washington, DC) – Judicial Watch today released documents detailing how the U.S. Department of Agriculture (USDA) is working with the Mexican government to promote participation by illegal aliens in the U.S. food stamp program. 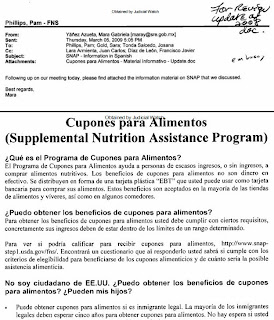 Click to zoom
The promotion of the food stamp program, now known as “SNAP” (Supplemental Nutrition Assistance Program), includes a Spanish-language flyer provided to the Mexican Embassy by the USDA with a statement advising Mexicans in the U.S. that they do not need to declare their immigration status in order to receive financial assistance. Emphasized in bold and underlined, the statement reads, “You need not divulge information regarding your immigration status in seeking this benefit for your children.”

...The documents obtained by Judicial Watch show that USDA officials are working closely with their counterparts at the Mexican Embassy to widely broaden the SNAP program in the Mexican immigrant community, with no effort to restrict aid to, identify, or apprehend illegal immigrants who may be on the food stamp rolls...

...“The revelation that the USDA is actively working with the Mexican government to promote food stamps for illegal aliens should have a direct impact on the fate of the immigration bill now being debated in Congress,” said Judicial Watch President Tom Fitton. “These disclosures further confirm the fact that the Obama administration cannot be trusted to protect our borders or enforce our immigration laws. And the coordination with a foreign government to attack the policies of an American state is contemptible.”

Who needs Amnesty? The Obama administration and the Mexican government are collaborating in bankrupting this nation. Each year, hundreds of billions of dollars are stolen through rampant waste, fraud and abuse of America's wealth redistribution programs. And the White House is actively encouraging it.

Our nation is going broke and the Democrat Party is actively trying to send it over the cliff.