Barack Obama is a lame duck president. Nobody listens to what he says anymore, nobody is interested in winning his approval and nobody much cares if he thinks they have “let the country down”. 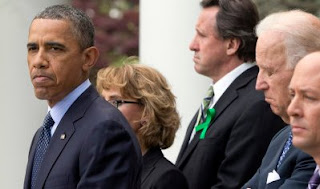 This is typical for a second-term president who has lost all their leverage because they’re no longer running for office and everybody is patiently waiting for the day when he quits the White House.

But Obama's difficult personality has doubled the size of the challenge. Gloating in victory, adolescent in defeat – the Prez doesn’t make it easy to work with him. Why should conservative senators give him a legislative victory after he has spent four years painting them as knuckle-dragging rednecks who hate women and the poor?

Whatever your position on gun control, yesterday’s events are a damning indictment of Obama’s presidency – a flash of style, lots of soaring rhetoric and, when the votes are actually counted, little show for any of it. America has four more years of this lame-duck president telling them that it has let him down. If only he could tear up the Constitution and rule by diktat he might save himself a little disappointment. Alas, American democracy is a stickler for rules.

The demagoguery has reached such a crescendo that even The Stuffington Roast offered a take on the speech "the deranged sorority emailer" would write for Obama on gun control.