Or explosives permits, for that matter. 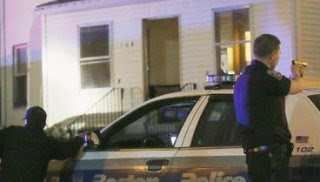 Massachusetts police official say the brothers suspected of bombing the Boston Marathon before having shootouts with authorities didn't have gun permits.

Cambridge Police Commissioner Robert Haas tells The Associated Press in an interview Sunday that neither Tamerlan Tsarnaev (tsahr-NEYE'-ehv) nor his brother Dzhokhar had permission to carry firearms.

...he [also] says the 19-year-old Dzhokhar (joh-KHAR') would have been denied a permit because of his age. Only people 21 or older are allowed gun licenses in Massachusetts.

The suspects were also accused of hijacking a Mercedes on Thursday night.

Haas says the pair didn't release the driver, but he escaped when he was left alone while the two men entered a convenience store.

ooohhh noooes you mean they werent restrained by gun laws?!! they went around all those awsome gun control laws Massachusetts has to keep them safe? they ignored the law and went ahead and used guns without the governments special permission?

why its positively criminal! its almost like they didnt care about the rule of law!

but never mind all that, did they advocate for big gulp sodas or call global warming a fraud?! cause thats a real concern.

The gun control politicians forgot to make a law making it mandentory to be restrained by gun laws.

The nerve of these hooligans!How inconsiderate of them!They deserve a good tongue-lashing for causing D.Feinstein to push kittens out her birth canal!Oh, the humanity!!

It is insane that this is even a story, but it gives the cops something to do and that's to track down the original owner and prosecute him for what somebody else did with his tools.
Mexicans drive here every day without driver's licenses... only a liberal would see something wrong with a criminal not having a pistol permit.