CBS News senior correspondent John Miller said there is “an individual in custody,” a Saudi national who was near the scene of the blast.

Miller said a civilian claims the person was acting suspiciously and chased him down and tackled him after the explosions.

The man is said to be cooperating with investigators and denies any involvement.

While unconfirmed by authorities, this jibes with an earlier report by The New York Post: 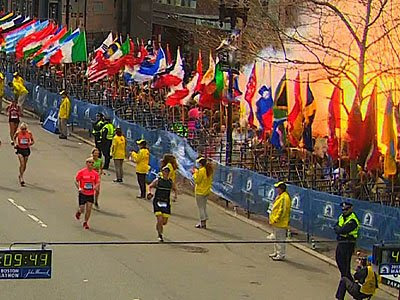 Investigators have a suspect — a Saudi Arabian national — in the horrific Boston Marathon bombings, The Post has learned.

The man was caught less than two hours after the 2:50 p.m. bombing on the finish line of the race, in the heart of Boston...

In addition, Boston police have surveillance video of someone bringing multiple backpacks to the blast site, according to CBS News.

To be clear, this is preliminary information. Our heartfelt thoughts and prayers go out to those impacted by this terrorist attack.

Well, shooting up innocents is terrorism, so is bombing them. If we are enduring howls from dRATS for more gun control laws then I want to see them as compelled to pass more laws restricting bomb making.
And lt us be clear, when a Nation rejects God and His values then we invite His curses. Terrorism is explicitly named in the Good Book as one of these. Had enough? Repent.