ATTORNEY GENERAL ERIC HOLDER: All 7 Billion Humans on Earth Have a Civil Right to U.S. Citizenship

If there has ever been a more malevolent Attorney General in American history, I'd like to know about it.

Attorney General Eric Holder told MALDEF, the Mexican American Defense and Educational Fund on April 24th, that he believes illegal aliens have a “civil right” to be put on a path to US citizenship. 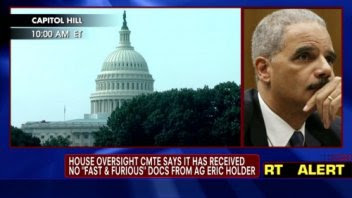 HOLDER: Creating a pathway to earned citizenship for the 11 million unauthorized immigrants in this country is essential. The way we treat our friends and neighbors who are undocumented – by creating a mechanism for them to earn citizenship and move out of the shadows – transcends the issue of immigration status. This is a matter of civil and human rights. It is about who we are as a nation. And it goes to the core of our treasured American principle of equal opportunity.
It’s also about the law and whether it and our sovereignty mean anything or not. Holder answers in the negative — they don’t. Anyone anywhere in the world can come here by hook or by crook, and crooks like Holder will make them citizens.

Consider the import of an Attorney General refusing to enforce our nation's most important laws: those underpinning equal protection, national sovereignty and national security. We have a government that intentionally ignores its own laws in pursuit of centralizing more power. There's an adjective for governments like this: tyrannical.

Had we statesmen or real leaders running the House of Representatives -- not clownish, cowardly buffoons like John Boehner and Eric Cantor -- Eric Holder would have been impeached long ago.

HOLDER: "This is a matter of civil and human rights."

Well it sure as hell is not a matter of Law.

We may as well just declare all of the world US citizens. We're already sending everyone our money. Is there a country anywhere that doesn't get money from us?

Gotta agree with Robin H - if we unilaterally declare that everyone else is a US citizen - it would force them to quit hating us and just think of all the taxes that CONgress could collect!

It's insane who just who is in highest positions of power in our country. Considering we've got at least 3 and a half years left of the malignant likes of Holder, we've got to be vigilante -- and we have got to be on top of the RINO hacks ridiculously in the top positions of the GOP. Better yet, boot the RINOS aside and get down to business.