Well, this would normally disqualify a politician from public office, but not a Democrat and certainly not Hillary Clinton.

A congressional report shows security cuts before the Benghazi attack were approved by the secretary of state and that White House talking points describing the events were edited to protect the State Department.

...Despite then-Secretary of State Hillary Clinton's denials that pleadings from Ambassador Chris Stevens, killed in the terrorist attack, never reached her desk, the interim Benghazi report concludes that:

Reductions of security levels prior to the attacks in Benghazi were approved at the highest levels of the State Department, up to and including Secretary Clinton. This fact contradicts her testimony before the House Foreign Affairs Committee on January 23, 2013. 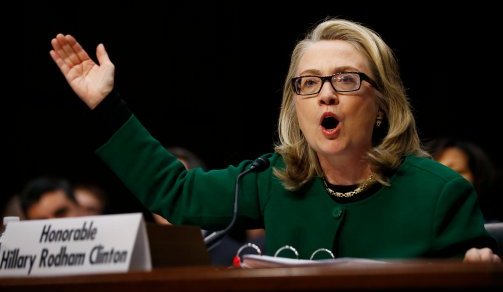 Indeed it does. On that date, Clinton testified: "I have made it very clear that the security cables did not come to my attention or above the assistant secretary level where the ARB (Accountability Review Board) placed responsibility."

The 46-page report by the five committees of jurisdiction cites an April 19, 2012, cable bearing Clinton's signature acknowledging a formal request dated March 28, 2012, from then-U.S. Ambassador to Libya Gene Cretz for additional security assets but ordering the withdrawal of security elements to proceed as planned.

...The report quotes one email saying there was concern that members of Congress would attack the State Department for "not paying attention to Agency warnings" regarding the mounting threat in Benghazi. 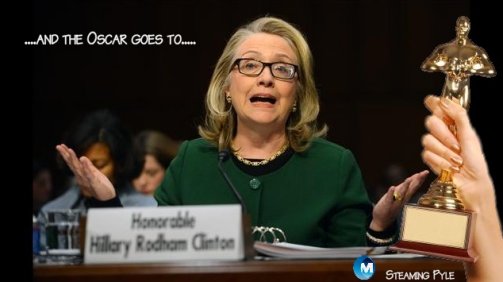 The report also says changes eliminating the truth about Benghazi were made at the behest of the White House and the State Department, and that the changes were made to make the administration look good.

The administration then sent Susan Rice, U.S. ambassador to the United Nations, to appear on five Sunday morning talk shows with the newly edited talking points and the bald-faced lie that the attack on the Benghazi compound was spurred by a "spontaneous" demonstration against an anti-Muslim Internet video.

"What difference, at this point, does it make?" was Clinton's heated response when pressed why the White House long insisted the deaths of four Americans was the result of reaction to a YouTube video and not to an organized terrorist attack for which the administration was not prepared and tried to sweep under the Oval Office rug.

To the families of Christopher Stevens, Glen Doherty, Sean Smith and Ty Woods, the truth still matters and makes a world of difference.

I've said it before and I'll say it again. When the complete history of the Obama administration is written it will make Watergate look like a Lindsay Lohan shoplifting incident.

That sign in front of her should read "Dishonorable" Hillary Clinton.

Why to we tolerate this deceit, corruption, evil, conspiracy at the highest levels of this noble country? Why don't those we have elected to check and balance horrific hacks like Hillary hang her by her own words and run her out of Washington in a rail into the nearest federal penitentiary? Is this seriously the best we can do? Is America really this asleep at the wheel, in spite of the complicit mainstream media? WAKE UP! Pitch her and all her cronies and the liar in chief out on their ears! NOW!

The degree of corruption, dishonesty and what's in it for my agenda thought process in politics, is getting to the point of surrealism. I mean, is this crap for real with our society and government? Dear God, please help us. Our government is murdering with malice for an agenda.

Lying under Oath, Deception, Cover-up, etc, etc, are all considered good quality traits and achievements, in the lowlife liberal progressive socialist marxist world of the Democrats/Obamarat's and Clintonrat's..

If they had any integrity, honor, and respect, they wouldn't be liberals/Democrats/RINOs- they'd be conservatives.

She has to me mentally exhausted from keeping all of her lies straight.

And Congress won't do a d@mned thing about it.

This country has turned in to a bad joke.

Lawless, status driven. We are the laughing stock of the world.

The bitch should be in prison for all her corrupt and criminal actions.

When will there be consequences? We know the press is corrupt, and we expect nothing from them but democrat propaganda.

But OUR side? -- the GOP leadership? The pathetic examination of Clinton during the recent Congressional hearings both embarrassed the GOP Senators who failed to call out her failures and lies for what they are, but just let her off the hook!

We've got to stop collectively complaining about the left's actions (no one hears our complaints but us -- the choir, so to speak). We've got to reach the voters, and the only way we can do it is by our GOP leaders taking charge. Ted Cruz and Rand Paul come to mind.

Finally, we have GOT to boot Boehner fom the Speaker position, or be content with his pathetic, cowardly, backstabbing ways result in his handing the House to the democrats in 2014.

What difference..at this point...does it make

Hmm, a Clinton lied under oath, not a new concept.

Isn't it long past due when Hillary is speaking before any group including Congress that the name plate that sits in front of her be altered to remove the word 'Honorable'.
I mean really.

At least now we know the Butcher of Benghazi is qualified to be president of the now divided states of america.