I only report. I don't decide.

(Ahlul Bayt News Agency) - A Saudi Shiite woman has been sentenced to eight lashes by a court in Qatif for mistakenly sending a text message allegedly promoting the Shiite branch of Islam.

The 30-year-old woman, identified only as YH, has been pronounced guilty for sending an SMS to another Saudi woman, containing a list of internet addresses under the name 'Shiite Islamic religious services'. 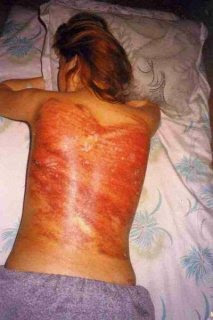 One of the addresses apparently belong to Fatwas of Ayatollah Sistani, Iraq's most senior Shiite cleric who is renowned throughout the Gulf for his learned counsel on Islamic law.

The Saudi Arabian state is a staunch adherent to the Wahhabi, and publicly disparages the Shia sect. Shia Muslims are not allowed to practice their faith, or even profess their sectarian beliefs in private.

The act of calling people for Shiism, or openly advocating the Shia faith, has been pronounced as haram (forbidden and despicable in Arabic) by the Attorney General, who publicly demanded that YH be severely punished.

The sentence was eventually conferred by judge Davoud Mohammad al-Davoud, who, according to local sources, is an extremist sectarian with a history of harsh judgements.

The defendant, from the district of Awamiyya, vigorously contested the judgement.

"According to claims by the Attorney General, I have sent the SMS wrongly to an unknown number, and this might happen for anyone else, so, I do not accept the accusations," YH told the court, according to a report in Mehr News.

However, despite her vehement protestation YH has been unable to win a reprieve against her sentence.

Take this report from Iran with a grain of salt. The failed Persian state is in an undeclared state of war with the Sunni sect of Islam, represented primarily by Saudi Arabia.

So as for these genteel blokes acquiring nukes -- well, I for one don't foresee a problem.

Religion of peace...what a pathetic, misguided...whenever I see this type of Islamic "justice", I thank my God for Christianity.

Mohammad Al-Harbi said...
This comment has been removed by the author.
6:20 PM

Whatever the credibility of this story, I feel sorry for her but believe me the problem not in Islam. the problem is in people who follow. For your information, most of Muslims nowadays are not obeying teachings of Islam. If you want know the truth of Islam, go and read a copy of holy Qur'an (Source of legislation). Most of media do not reflect the fact about any thing and there are so many examples.