“One of the things the government can’t do is run anything. The only things our government runs are the post office and the railroads, and both of them are bankrupt.” – Lee Iaccoca 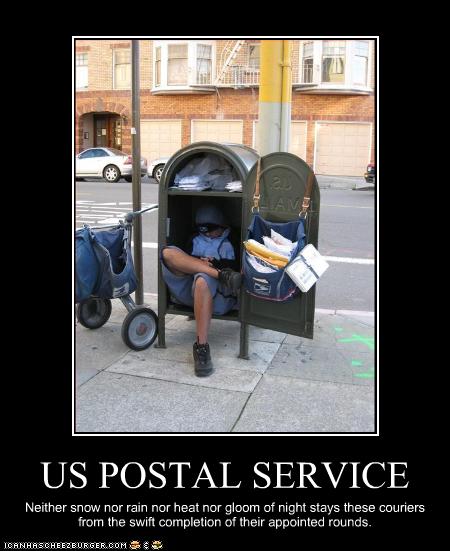 You may have heard that the U.S. Post Office lost $16 BILLION last year. You may also have heard that Congress snuck a requirement into a bill that had nothing to do with the Post Office, mandating that they must deliver on Saturdays, even though eliminating Saturday delivery would save the Post Office $2 BILLION per year. Congress evidently can’t read a financial statement or interpret a chart. I’m sure the trends detailed on this chart will reverse themselves shortly. 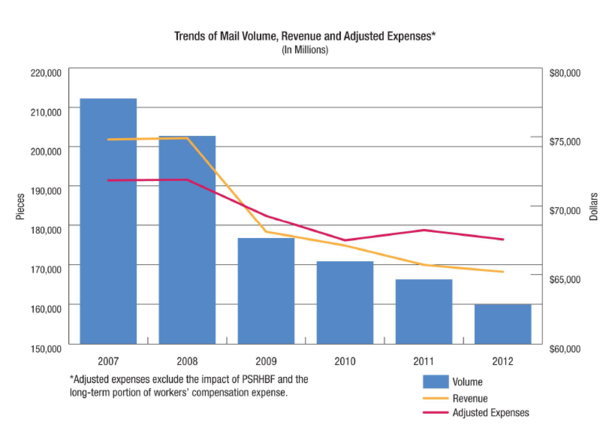 While reading an editorial today supporting the Post Office in its efforts to save money by eliminating Saturday delivery I saw another MASSIVE LIE perpetuated by the MSM and the government.

Here is the Orwellian statement:

This is complete and utter bullshit. This statement also described Fannie Mae and Freddie Mac until 2008. They were just little old independent government agencies helping out the housing market – until the shit hit the fan!!! Then they became albatrosses around the necks of the American taxpayer. You own them now. They have lost $200 billion of your tax dollars, and will lose billions more before all is said and done.

The honesty of the people writing this report is refreshing. They essentially admit they are BANKRUPT and unable to meet their financial obligations. In other words, a truly INDEPENDENT entity admitting they can no longer operate. How is this for honesty:

“The Postal Service continues to suffer from a severe lack of liquidity. The Postal Service held total cash of $2.9 billion and $2.3 billion as of December 31, and September 30, 2012, respectively, and had no remaining borrowing capacity on its $15 billion debt facility (See Note 3, Debt, for additional information). The increase in cash balances for the quarter is largely attributable to the seasonal impact of holiday mailings, along with additional revenue resulting from this year’s political campaign and elections. Cash balances generally decline during the remainder of the fiscal year, as revenue is not as strong in the remaining quarters. By the end of this fiscal year, the Postal Service projects it will have a liquidity balance that will be less than its average weekly expenses of $1.3 billion. This low level of available cash means that the Postal Service will be unable to make the $5.6 billion legally-mandated prefunding of retiree health benefits due by September 30, 2013. Further, this level of cash could be insufficient to support operations in the event of another significant downturn in the U.S. economy.

Through the three months ended December 31, 2012, the Postal Service has suffered 5 quarters of consecutive net losses and net losses in 14 of the last 16 quarters. The net loss of $1.3 billion for the first quarter of the year included $1.4 billion of expense accrued for the legally-mandated prefunding payment for retiree health benefits. The requirement of the Postal Accountability and Enhancement Act, Public Law 109-435 (P.L. 109-435) to prefund its retiree health benefit obligations, a requirement not shared by other federal agencies or private sector businesses, plus the precipitous drop in mail volume caused by changes in consumers’ uses of mail, have been the two major factors contributing to Postal Service losses since the recession ended in 2009. Without structural change to the Postal Service’s business model, it will continue to be negatively impacted by these factors and, absent legislative change, it anticipates continuing quarterly losses for the remainder of 2013.”

The politicians that are mismanaging this country use governmental accounting fraud to cover-up the fact that the obligations of this bloated pig of an operation are going to be paid by YOU, the taxpayers of the United States. Today, none of the past, current, or future liabilities of this INDEPENDENT GOVERNMENT AGENCY are reflected in the Federal budget projections or the National Debt calculation.

Do YOU want to know how much YOU really owe? Brace yourself.

This really sounds like a promising story. Mail volumes continue to plummet. Someone should tell Congress the internet age has arrived. The Post Office has thousands of money losing, unneeded outlets. It has 637,000 employees when it only needs 300,000. Over 70% of Americans favor ending Saturday delivery, so Congress passes a law making that impossible to implement, ensuring $2 billion more losses per year. That’s par for the course. Over 70% of Americans were against passing TARP too. And according to your leaders in Washington, and parroted by the MSM, you are not on the hook for their losses.

It’s beyond laughable, but so is most of what is going on in this tragedy of a country, disguised as a comedy. The truth is that you are on the hook for the $36 billion of accumulated deficits, the $85 billion of debt and contractual obligations, and the annual $16 billion losses they continue to pile up. But what’s $120 to $150 billion among friends? Bennie can print that out of thin air in a few days. Why run an operation efficiently at a surplus, when you can keep hundreds of thousands of union government drones employed (until they go on workers comp) by sticking it to the working American taxpayer.

I sure hope I don’t get a visit from the Postmaster General because of this article.

My postwoman has introduced me to more neighbors than I would have done on my own. We're always trading each others mail. My favorite was my son's prescription medication from the VA going to a neighbor with young kids.