Tyranny: New York Mayor Michael Bloomberg says that in light of the Boston Marathon bombing, our interpretation of the Constitution will "have to change." Americans should be appalled at such a statement.

But they're not. His comments "we live in a complex world where you're going to have to have a level of security greater ... our laws and our interpretation of the Constitution, I think, have to change" have drawn yawns.
More frightening than his statement is the nagging fact that the public has not risen up in opposition to his declaration. A free nation should respond to such a crude threat to its liberties with righteous anger.

But we're not such a free nation anymore. Long ago much of the country changed its interpretation of the Constitution. To many now, it simply means what they want it to mean, not what it actually says. 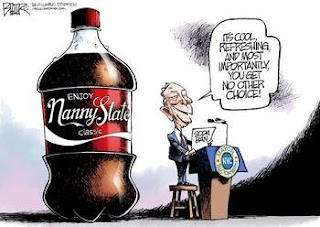 These acts were done, however, quietly and gradually. No one announced that the Constitution was going to be violated, that our liberty would be infringed upon.

But Bloomberg, who doesn't care one hoot about constitutional or God-given liberties, telegraphs an intention to breach the Constitution and no one is scared?

Maybe that would change if the right questions were asked, such as:

Whose interpretation does the mayor suggest we follow? And if the question is simply which group gets to decide, then aren't we living in a land not of law but of force?

What about those who disagree with the new interpretations? Is it just tough luck for them?

Should the dissenters simply sit down, shut up and accept whatever the political elites hand down?

Bloomberg's explanation is that he merely wants to protect Americans from a "very dangerous world" where "we know there are people who want to take away our freedoms." Freedoms, Mr. Mayor, such as the choice of soft drink size, the voluntary and peaceful intake of salt and trans fats, or the right to own firearms?

Maybe there are enemies out there who want to take away our freedoms. But clearly, and sadly, we have political leaders who want to do the same thing.