"Come out to the pyramids, we'll get together, have a few laughs"

Not to make light of yet another tragedy in the Middle East, but the latest news out of Egypt isn't going to help the tourism trade: 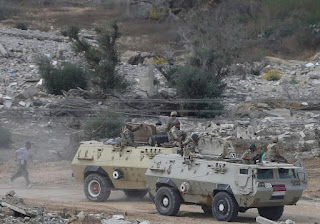 Egypt's police and military killed 12 Egyptians and Mexicans and injured 10 when they accidentally shot at a Mexican tourist convoy whilst engaging militants in the country's western desert, the Ministry of Interior said on Monday.

"The incident resulted in the death of 12 Mexicans and Egyptians and the injury of 10 others who have been transferred to hospitals," the ministry said in a statement.

It added that the convoy was made up of four four-wheel drive vehicles and that there would be an investigation into how and why the tourists entered an off-limits area.

Egypt is battling an insurgency that gained pace after the military ousted Islamist President Mohamed Morsi of the Muslim Brotherhood in mid-2013 after mass protests against his rule.

The insurgency, mounted by Islamic State's Egyptian affiliate, has killed hundreds of soldiers and police and has started to attack Western targets.

By all means, let's import more Muslim refugees into the United States -- hundreds of thousands of them if Democrats had their way. That should make things better. After all, the higher the percentage of a country's citizens are Muslims, the more that peace and tranquility rule the day.


Mexican tourists in a forbidden area of a nation suffering an insurrection, golly, sounds normal to me!

I'd be more worried about what these folks were going to distribute through our southern borders. Probably 40 foot containers with supplies for refugees.

Hey, can we get some Egyptians on OUR southern border? Right action, wrong place. Though... there might have been criminal intent by either the company or the tourists. Something fishy going on there, too, to be honest. Then again, only half of the illegal population comes over the border. The rest flies in. That too has to stop, but before they ever reach here.