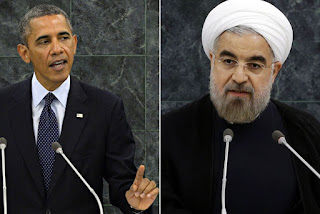 41 Democratic Senators chose to back an Iran deal that is a disaster for national security, a gift to terrorists and a path to war. Here are the five worst things about the deal that the #41Traitors now own.

5. We Don't Know What's in the Deal - While the text of the treaty is online, the devil is in the details. Those details are the agreements between Iran and the IAEA. Iran has demanded that those agreements be kept secret. The #41Traitors are backing a deal whose contents they don't even know. We have to pass it to find out how many nuclear bombs Iran ends up with.

4. Iran Inspects its Own Nukes - One of those leaked agreements lets Iran inspect its own work at Parchin, a nuclear weapons complex, in which Iran will use its own inspectors and its own tools, and send back photos and videos to the IAEA. The AP wrote the story. The White House denied it, but refused to release the details, instead spreading a response from Vox, a hoax site which once claimed that there was a giant bridge over Israel.

3. The Deal Will Drag the US Deeper into Iraq - Sanctions relief for Iran means more money for it to pursue its wars in Syria, Iraq, Yemen, Lebanon and terrorism around the world. Iran's push for the Shiites destabilized Iraq and helped lead to the rise of ISIS. As the Sunnis in Iraq feel more persecuted by Iran's Shiite terror, they are more likely to back ISIS or other Sunni groups. And the longer this goes on, the more the US will become involved.

While Obama accused deal opponents of being behind the Iraq War, his deal is likely to drag the US deeper into Iraq.

2. An Imperial Presidency - Obama went to war in Libya without asking Congress. Now he wants unilateral authority on the other end too. By trying to block Obama from even having to veto Senate disapproval of his treaty, the Democrats are doubling down on an imperial presidency in which the White House has complete and total control over all aspects of foreign policy.  Not only is this a violation of the Constitution, but it turns Obama into a king who can go to war or sign treaties without the consent of Congress.

Democrats claimed they hate unilateralism and the imperial presidency, but they just doubled down on it.

1. Iran Will Get the Bomb - Even Obama admitted that the deal gives Iran near zero breakout time to the bomb. That was before he took it back and started claiming that the deal, which lapses, will somehow "permanently" stop Iran from going nuclear. If Iran cheats, which it has on past agreements, then it will get the bomb sooner than that. Either way this deal does not stop Iran from getting the bomb. It puts it on a path to getting the bomb.

The #41Traitors who voted for the deal, voted for an Iranian nuclear bomb.