Rich Lowry, writing at -- of all places -- Politico has an interesting analysis of the current GOP state of play ("Ted Cruz, Sitting Pretty"):

Ted Cruz isn’t topping the polls or dominating the conversation, but he’s one of the winners of the past few months. 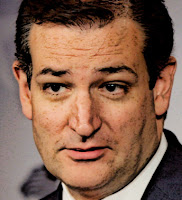 Let’s review. There was always the danger of Cruz, who made his national reputation on the strength of a misbegotten government shutdown, seeming like too much of a bomb-thrower. That was before it began to look like the Republican Party is open to a candidate only slightly less disruptive than Auguste Vaillant, the 19th-century French anarchist who struck a blow against politics as usual by literally throwing a bomb into the French Chamber of Deputies in 1893 (the establishment wasn’t amused — it executed him).

Such is the disgust with the Republican leadership, that there is no longer such a thing as going too far.

Cruz could burn John Boehner in effigy, and no one would bat an eye. Cruz could make a citizen’s arrest of Mitch McConnell on the Senate floor on grounds of gross crimes of omission against the constitutional republic, and the Luntz focus group would applaud his plucky initiative. In sum, there’s nothing Cruz could do short of pissing in the Yankee Bean soup in the Senate dining room that would be too outlandish, and even then his most devoted fans might say, “It’s about damn time!”

This must be liberating for Cruz, who has already called McConnell a liar and blamed Boehner and McConnell for not stopping the Iran nuclear deal — and he’s just getting started...

I liken Cruz to a NASCAR driver who is drafting the leader.

Saw your link at Adrienne's: I think you might have something there. I wouldn't mind seeing him as the dark (pardon the pun) horse. Did you pick up on his very quick comment about the the UN's World Court?