As record numbers of Muslim migrants enter the United States, and as a surge of Central Americans swamps our southern border, GOP presidential candidate Sen. Marco Rubio (R-FL) is using his presidential campaign to promote citizenship for those who come here illegally and take American jobs, benefits and residency. 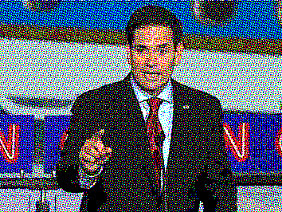 In a September 21 interview with Fox News host Sean Hannity, Rubio said that within 10 or 12 years — which would be after the U.S. foreign-born population has swelled above 51 million on current trends — “you could have a broader debate about how has this worked out and should we allow some of them [the illegal foreign-born] to apply for green cards and eventually citizenship.”

In a quote provided yesterday to New York Magazine, Rubio’s spokesman made clear that Rubio’s position on citizenship for illegals has not changed since he worked with President Obama and Senator Schumer on the “Gang of Eight Bill.”

Rubio’s spokesman declared: “Marco has repeatedly stated — and did so again last night — that he is open to green cards after 10 years.”

A “green card” is the document that entitles foreign nationals to collect welfare, draw Social Security and Medicare, bring their foreign relatives into the U.S., and become voting citizens. In fact, the Obama Administration is currently working to get as many people on green cards as possible to vote before the 2016 election. The Obama Administration refers to green card holders from foreign lands as “New Americans,” echoing Rubio’s campaign theme of a New American Century.

A review of past Rubio comments shows that he is still using the same talking points now as he did in during the 2013 “Gang of Eight” effort to push his citizenship program for illegal entrants into U.S. society.

As Fox’s Bill O’Reilly said at the time upon announcing his decision to endorse Rubio’s amnesty bill:

Senator Rubio told me on the phone today that it would be at least thirteen years– thirteen– before people in the country illegally right now could gain full legal working status and even longer to achieve citizenship.

What Rubio does not tell people is that 10-13 years is the maximum– not minimum– amount of time it would take for illegals to be made voting U.S. citizens under his current amnesty plan.

Rubio’s amnesty plan would give out instant work permits and the first group of illegals could apply for citizenship within just 5 years.

As Democrat Senator Sen. Richard Blumenthal (D-CT) has explained, “The DREAM Act in S.744 [the Rubio-Schumer bill] provides a 5-year path to citizenship.” This directly contradicts the citizenship timeline Rubio has laid out dozens of times in interviews.

Just a few months ago, in a Spanish-language interview, Rubio explicitly reiterated his commitment to 5-year plan to citizenship for illegal minors– or so-called DREAMers. Rubio promised that amnesty for DREAMers would precede securing the border. During the April 2015 interview in Spanish, Rubio admitted he wouldn’t immediately end Obama’s DACA.

As Breitbart News reported in August, after Rubio’s position on amnesty was exposed, “Phyllis Schlafly, architect of the modern conservative movement and tireless opponent of mass immigration, [said that Rubio] should be disqualified from the race for dishonestly saying one thing about amnesty in English [while promoting it] in Spanish.”

The DREAM Act, pushed by Senator Dick Durbin, does not exist in other countries and was designed to create a permanent loophole to U.S. borders. That is, if parents can illegally bring their children, and the children become citizens, then the parents and other relatives can stay too – a similar principle to the anchor baby phenomenon except it is applied to any of the world’s two billion foreign youths who can manage to get inside U.S. borders with their parents before turning 18.

Unlike most Western countries in which all foreign nationals illegally residing in the country are subject to immigration laws, in the United States, DREAM amnesty proposals have effectively carved out a sector of the illegal immigrant population — illegal minors — who are exempt from immigration law.

The Left uses Marco Rubio’s DREAMers as a rhetorical battering ram to break down Americans opposition to amnesty. Dick Durbin, for instance, frequently takes to the Senate floor equipped with props– such as enlarged pictures of carefully selected illegals– and recounts compelling human interest stories to explain why lawmakers ought to waive federal immigration law.

[Maria] spent her vacation time helping people in need… another year she worked with the homeless… she graduated as a valedictorian of her class… America is better if Maria can stay… I cannot understand this mean-spirited political strategy that cannot wait to deport this wonderful, amazing, young woman from America.

Durbin even has a portion of his official Senate website dedicated to “Dreamer’s Stories.” Interestingly, this portion of Durbin’s website makes no mention of the stories of DREAMers such as Hermilo Moralez, who tortured and murdered his American classmate after the classmate had offered to give him a ride home; or Emmanuel Jesus Rangel-Hernandez, who’s suspected of killing “several people in North Carolina, including former ‘America’s Next Top Model’ contestant,” or Cinthya Garcia-Cisneros, 19, who drove over a 6-year-old and 11-year-old girl and then fled the scene.

Experts explain that once the United States codifies a principle that illegal minors receive amnesty, there can be no resistance to mass immigration. As former USCIS union president Ken Palinkas has asserted, DREAM amnesty “extend[s] birthright citizenship in the future to include the foreign citizens of other countries” and represents a promise of “perpetual amnesty.”

Senator Sen. Jeff Sessions (R-AL) has explained, “It cannot be the policy of the United States that any of the 2 billion people in the world who have yet turn to turn 18 have a right to illegally enter the United States and claim residency.” As government reports have documented the American people witnessed the threat DREAM amnesty poses to national sovereignty in 2014 when tens of thousands of unaccompanied minors swarmed the southern border on the promise of amnesty.

Donor class Republicans have similarly latched onto to Durbin’s strategy.

Marco Rubio has been one of the most ardent supporters of DREAM amnesty– a position which led to Eric Cantor’s historic downfall. In 2012, Rubio began work on his own version of the DREAM amnesty.

At the time, Rubio told Fox News viewers that his bill was necessary to “deal with a humanitarian issue. And that these children who entered this country illegally or have overstayed visas illegally, through no fault of their own… These are children, they follow their parents. The parents put them in this predicament.”

These are almost identical to the talking points of Eric Cantor.

Rubio’s plan, as he told CBS’ Norah O’Donnell “would award the kids who meet a certain criteria… a student visa, and thereafter, a work visa,” and it “would then allow them to access the immigration system… in essence if they want to become a green card holder, they would be able to do so.”

As a conservative Hill operative tells Breitbart News, “Every person in Washington who is familiar with Senator Rubio and the business interests managing his image and campaign understand with irreducible clarity that Mr. Rubio’s election would bring with it the guarantee of an immigration agenda so radical that President Obama himself would dare not affix his name to it for fear of overreaching.”

“Therefore,” the operative continued, “The only reason an informed person would cast a ballot for Mr. Rubio would be if she had a strong personal desire to empty her own bank account and split the modest savings between Rubio’s well-heeled donors and the workers that will be imported to take her place.”