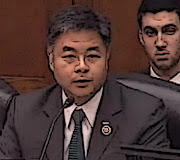 Rep. Ted Lieu (D – Calif.), an Air Force veteran and a member of the Congressional Progressive Caucus, announced his opposition to the nuclear deal with Iran today in a detailed 23-page press release (.pdf).

Lieu stated that his opposition to the deal, formally known as the Joint Comprehensive Plan of Action (JCPOA), comes from one of his “guiding principles” of avoiding war. “I have concluded the JCPOA increases the chances of more regional conflict and US entanglement in the Middle East in the short term, and a lengthy, difficult and more deadly war with Iran in the long term ” Lieu stated. He then laid out how he expects the terms of the JCPOA to play out over the next 15 years.

1. In the short-term (years 1 to 4), regional wars and conflict will likely increase because Iran will use part of the upfront infusion of $50 to $100 billion to fund terrorist networks and violent proxy regimes in a volatile region of the world during a particularly volatile time. This will fuel an even larger arms race in the Middle East and cause Iran’s enemies to retaliate. Our allies in the Middle East have already asked the US to provide more assistance, which could increase American entanglement in the Middle East. Keep in mind the US is currently bombing in Syria (which I oppose); has ground troops in Iraq (which I oppose); and is helping Saudi Arabia bomb Yemen (which I oppose).

2. In the medium term (years 5 to 8), regional wars and conflict could get even more lethal. Iran can considerably build up its military—including ground, air and missile capabilities—because the deal specifically lifts both the arms embargo in year five and the ballistic missile ban in year eight. (The surprise lifting of these two arms control provisions makes the JCPOA weaker than the framework announced at Lausanne). Iran can also seek to provide advanced conventional weapons and missiles to its terrorist networks and proxy regimes. Moreover, Iran can more easily acquire technology that will allow it to develop intercontinental ballistic missiles.

3. In the long term (years 8.5 to 15+), the chances increase of a more protracted, difficult, and deadlier war. That’s because Iran’s nuclear breakout time goes down to a few weeks or near zero not just for one nuclear weapon, but rather for many nuclear weapons along with the potential ability to deliver those weapons onto American soil with intercontinental ballistic missiles. With Iran building up its military and snapback sanctions expiring, options to the American president become more limited. If Iran were to race to build nuclear weapons when the JCPOA’s nuclear rollback provisions expire, the US might not be able to take out Iran’s nuclear facilities with just airstrikes. The JCPOA thus exposes America to a grave, potentially existential threat that would be unlikely to occur but for this deal.

Lieu’s analysis led him to conclude that there would be “existential consequences to the US if Iran simply followed the JCPOA for fifteen years. If Iran were to cheat, then the potential existential threat to America would occur sooner.”

Read more at The Tower