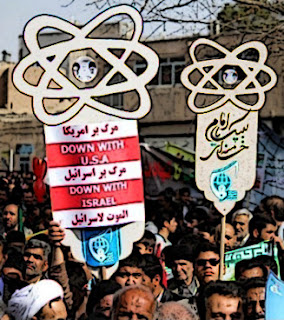 The specter of a nuclear-armed Islamic Republic of Iran is the single greatest threat facing our nation, and if President Barack Obama's catastrophic nuclear deal with the mullahs goes forward, there will be nothing to stop them from obtaining a nuclear bomb.

Astonishingly, we do not even know how bad the deal is because the Administration has not released all of the information relating to side deals with Iran as they are obligated to do under the terms of Corker-Cardin, the Iran Nuclear Agreement Review Act that Congress passed and the President signed into law.

Today I sent Senate Majority Leader Mitch McConnell and House Speaker John Boehner a letter that lays out the legal authority they possess as leaders in both Houses of Congress to actually stop this deal.

If we believe what we say about this deal—that it is a profound threat to our national security, to the survival of our friend and ally the nation of Israel and potentially to the lives of millions of Americans—then we should act like it. No show votes that are destined to lose; instead, the leadership should exercise their legal authority to actually prevent more than $100 billion from going to the Ayatollah Khamenei.

The approach I recommend entails a three-step process, and McConnell and Boehner should seize this opportunity to demonstrate leadership and make it happen.

First, both leaders should formally declare that President Obama has not submitted the agreement to Congress as required by Corker-Cardin. The terms of Corker-Cardin are clear: The president may not suspend any sanctions against Iran until he submits the entire agreement to Congress and gives Congress an opportunity to review it. The president has failed to submit widely reported but undisclosed side deals between Iran and the International Atomic Energy Agency that bear directly on the inspections regime at issue in the Iran agreement. Therefore, the president has not submitted a complete agreement as Corker-Cardin requires, and the 60-day clock for congressional review did not begin to run. As a result, critically, federal law prohibits the Obama administration from lifting sanctions under the agreement.

Second, Leader McConnell should schedule a vote on a resolution expressing the sense of the Senate that, if the agreement had been introduced as a treaty, it would not be ratified. This will put senators on record and will make clear that there is insufficient support in the Senate for approving the agreement as a treaty.

Third, given President Obama’s regrettable history of lawlessness, it is reasonable to assume that he will simply ignore the law and declare that he is lifting sanctions under the agreement anyway. On that assumption, we should make clear to the CEOs of banks holding frozen Iranian funds that their misplaced reliance on the president’s lawlessness would not necessarily excuse them from the obligation to comply with existing federal sanctions laws. And if they release billions in funds to Khamenei, they risk billions in civil (and possibly even criminal) liability once President Obama leaves office. Having spent years advising major corporations in private practice, I can say that their general counsels will likely tell them their legal exposure is real, which could well result in the banks deciding not to release the funds to Iran, despite the president’s actions.

This three-pronged approach is the only course we can take to actually stop the release of more than $100 billion to the regime in Tehran, which is the world’s leading state-sponsor of terrorism and which will use these funds to attack America and our allies.

And to reiterate, it is possible to stop the president because federal law—the explicit terms of Corker-Cardin—says so.

The legal authorities are straightforward. Corker-Cardin says that the president “shall transmit” the agreement to Congress. That starts a period of congressional review. Importantly, however, Corker-Cardin expressly states that “prior to” the transmission of the agreement and “during the period for congressional review,” the president “may not waive, suspend, reduce, provide relief from, or otherwise limit the application of statutory sanctions with respect to Iran.”

All of this is entirely within the authority of Leader McConnell and Speaker Boehner. It is no secret that they and I have not always agreed (to put it mildly), but this is an opportunity for them to show bold leadership. And I will readily sing their praises; as I told the Capitol rally yesterday, with regards to leadership, if they will only do the right thing, “I come not to bury Caesar, but to praise him.”

I therefore urge McConnell and Boehner to rigorously enforce federal law and declare that the president has failed to submit the agreement to Congress. Accordingly, under binding statute, the frozen funds cannot be released to the Ayatollah Khamenei, a theocratic zealot who pledges “death to America.”

The question of why the leaders of the Vichy GOP will not oppose Obama's Iran nuclear deal can be summed up in the FBI files that went missing during the Clinton years and an NSA that spends its time monitoring select American citizens. Under Obama I believe it is obvious why our fearless plastic gentlemen are in such a hurry to do Obama's bidding.

We need term limits and a hanging party.

McConnell and Boehner will ignore this advice. They are terrified that Harry, Nancy, and the MSM will say mean things about them. And they'd rather see Israel and possibly America destroyed than be seen taking advice from Cruz. And finally, they are devoted Obama fanboys and don't want to offend their hero.