IT’S COME TO THIS: Nearly a Third of Americans Would Support a Military Coup Overthrowing the Current Administration 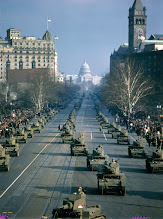 For many Americans, a coup in which the military seizes control of the federal government is starting to seem like a refreshing alternative to the existing administration, according to a new poll.

Conducted by YouGov, a new survey has found that 29 percent of Americans could imagine a scenario where they would support a military takeover in the United States. A total of 41 percent could not imagine supporting such an event. And so while the coup-supporters are still decidedly in the minority, the fact that the option polls so highly is remarkable. This translates to 70 million Americans who are potentially ready to support a coup.

The survey results revealed a clear political divide. Republicans were more than twice as likely to rate a potential coup more highly than Democrats, with the two parties polling 43 percent and 20 percent, respectively.

Part of the suspected reason for fondness towards a U.S. coup is that military officers consistently garner more public support than politicians. From the same survey, 70 percent of respondents think that officers want what’s best for America, compared to just 12 percent who think the same of members of Congress—a major disparity. In fact, 71 percent of respondents believe that members of Congress only want what’s best for themselves. Local politicians don’t fare much better at 59 percent.

While federal civil servants don’t perform as poorly as local politicians, 37 percent believe that they want what’s best for themselves, and only 22 percent think that civil servants have the best interests of the country at heart.

Police officers, in comparison, are viewed similarly to the military, though not quite as positively. A total of 55 percent of respondents think police officers want the best for the country, with 24 percent holding that these officers just want what’s good for them.

Talk of a military coup in the U.S. recently prompted renewed discussion after a professor at West Point was recently forced to resign following revelations that he authored several controversial articles. In one of those articles, titled “Alea Iacta Est: The U.S. Coup of 2017,” he argued that military officers, far from simply having the right to overthrow the government, may have a duty to do so if the federal government acts against the best interests of the country.

Sure everyone is happy until said coup comes for your guns.

I've been saying for at least 2 years that I'm amazed that a dozen Blackhawks haven't flown over from Andrews to the WH Lawn and arrested Obama and Jarrett.
MM

only a third of Americans fought for independence the first time...

There really is no other solution at this point it can;t not be fixed regardless of who is "elected". They serve only themselves.

Where are the real Americans?

No, a third of the population SUPPORTED the Revolution. Only 3% actually did anything about it. Most people, American or not, are quite unwilling to put their ass on the line. Even for their own ass. The other 30.333% receive very little praise, the third that didn't care one way or another receives dislike, and the final third should have been exiled. Not sure that would have kept an anti-American party from forming, then infecting the other party, but it's possible if exile had remained in use for those types.

I'm surprised that the secret service is still willing to protect the current oval office occupant. Considering that you must be pretty patriotic, to take a bullet for the POTUS, it seems that the anti-American fool now residing in the White House, must curl their nose hairs.

Yeah, they must know about his hijinx. That they haven't arrested him, or if they presumed that would fail, then patriotically shot him for his treason... then gain, I suppose in eight years he has paired away anything good in any part of those departments. Which then leaves me some surprise that his malfeasance hasn't lead to a failure to protect him. I honestly doubt, if the men in the SS are of his choosing and liking, that they either could, or would, save him.

It isn't just the SS. But then with Holder and this new turd running the DoJ, with the Supremes bowing to this jackwagon, and with congress willing to sell out quite cheaply, regardless of party, there isn't much left to go after him. I just remember that most emperors who were assassinated where assassinated by their own personal guard. Though, when an empire begins to assassinate politicians it is even more downhill than it seems now. A coup, but the military, might be the only other choice. I just think those have sold out, or been cleaned out, before even the other groups.

The only thing to consider is, if something breaks in one direction or another, unless it is well covered as with Kennedy, it will end the nation. Think hard before choosing, even in your heart. You may well get your wish and live to regret it.

It's not THIS administration that needs overthrown, it's the Entire Centralized System of Power, Corruptable, also the Federal Union Incorporated that needs to go.

I'd support a overthrow for the current administration and the leadership of the Congress. I would not support a Military Coup with the force we now have. Not after the last 6 six and the purge that's taken place within the Military.

The thing is, without a coup, the least would be for the military to agree to stay out of it. What do you think of those odds? While I still trust lower officers, and to a degree enlisted, I do agree that the higher ranks have been corrupted. A coup could not take place without military involvement, even if it meant a junior officer and enlisted takeover, and agreement to neutrality. Which... even if it got to that point would not hold.

Revolution, more so in the days of nuclear weapons and deranged elites, is a very risky business.