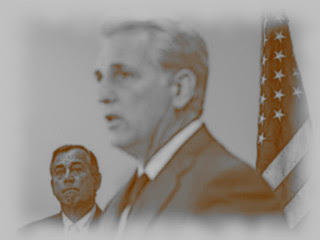 Levin’s a tirelessly warrior against Speaker Boehner and the Washington establishment. “Kevin McCarthy is Eric Cantor with 10 less IQ points,” Levin declares in an exclusive interview with Breitbart News.

The radio star adds Republicans must learn their lesson and not repeat the mistakes they made following Eric Cantor’s historic fall from power—namely that Republicans must replace Boehner with a “principled conservative.”

Levin explained that with the resounding defeat of the former-House Majority Leader, conservative voters made their voices heard and sent a clear message to the Republican establishment. Washington Republicans, however, refused to get the message.

“The Republican establishment never learned their lesson after Cantor… They replaced Cantor with McCarthy, who is a wheeler and dealer—he is not a principled conservative… My concern now is that they will do the same thing again,” Levin said.

Kevin McCarthy occupies the business wing of the Republican Party shared by other politicians like Rep. Paul Ryan (R-WI), Sen. Marco Rubio (R-FL), and Sen. Jeff Flake (R-AZ). All seem to think that increasing corporate profits through large-scale immigration and globalist trade pacts like Obamatrade are more important than prioritizing the wages of Americans or preserving America’s cultural identity as a Western nation.

This vision is also in line with the donor-class idea of governing, which means lowering expectations and trying to manage the affairs of Congress in a smooth and non-confrontational way. For instance, only a few days ago, presidential contender Sen. Marco Rubio dismissed attacks on Republican leadership in an interview with Fox News host Bret Baier. Rubio said, “expectations were raised unnecessarily high.”
In other words, that conservative voters were expecting too much when they sent their elected officials to Washington to represent them. This stands in contrast to his presidential competitor Sen. Ted Cruz, who recently suggested that Sen. Mitch McConnell (R-KY) has abdicated his position of power: “Today, Sen. Harry Reid (D-NV) is the de facto leader of the Senate.” Breitbart News asked Levin about McCarthy’s repeated support for open-border policies.
As Politico reported last year, McCarthy is viewed as the “go-to” guy for Silicon Valley because he listens to the tech giants’ concerns “100 percent” of the time. Silicon Valley billionaires such as Facebook’s Mark Zuckerberg have lobbied for countless immigration expansion bills– including Marco Rubio’s new I-Squared bill, which would essentially lift the cap on university green cards, triple the number of guest workers admitted on H-1B visas, and substantially increase Muslim immigration into the country.

“These guys are such lightweights.” Levin declared. “We need true leaders. They have too much tied to Washington, too much tied to the Chamber of Commerce, corporatists and the donor class.”

Levin said that House conservatives—many of whom are a part of the House Freedom Caucus—need to demand better for their voters.

“Those thirty or so Republicans need to remain united” to elect a principled conservative leader who represents the interest of Republican voters, Levin explained. “Republicans could make a real difference now for the Party and for the country if we elect a Speaker or a Majority Leader who’s a conservative—such as Rep. Jim Jordan (R-OH). But he’s just one example.”

“We need leaders who are solid, who are intelligent, who are strategic, who are constitutionalists, who can bring in– not just the mainstay of the Party– but demonstrate to millions of us in the grassroots that the message has finally been received. [We need to see that] there is a serious effort—not just a PR effort—but a serious effort to try to govern and keep the President in check—that they are prepared to fight, prepared to show courage, and that they’re going to stop cutting deals with the inside the beltway crowd.”

Levin explained that House conservatives should not squander the opportunity this new leadership election affords them.

“This is also the reason why you can see the rise of Donald Trump,” Levin explained. People are tired of donor class Republicans who refuse to represent the interests of their voters and they are ready for things to change.