On 27 January 1979, Pope John Paul II offered the following plea to the Clergy:

You are priests and religious; you are not social or political leaders or officials of a temporal power. For this reason I repeat to you "Let us not be under the illusion that we are serving the Gospel if we `dilute' our charism through an exaggerated interest in the wide field of temporal problems." (Address to the Clergy of Rome, 9 November 1978)...

...Let us not forget that temporal leadership can easily be a source of division, while the priest must be a sign and agent of unity and brotherhood. Secular functions are the specific field of action of laymen, who have to improve temporal matters with the Christian spirit. 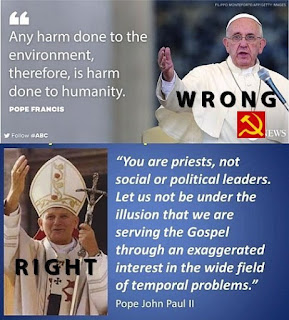 This statement stands in stark contrast to the exhortations of the current, radical Marxist Pope who has excoriated capitalism as "the dung of the devil".

It is not capitalism, but Marxism -- the ideology of both Pope Francis and Barack Obama -- that has resulted in more mass murder (138 million in the 20th century alone according to academics) and economic misery (the economic "failure of socialism in countries around the world can be traced to one critical defect: it is a system that ignores [human] incentives.") than any political system in history.

Paraphrasing the EIB Network, each of Pope Francis's encyclicals are often an unvarnished paen of some facet of Marxism, referring to "unfettered capitalism" and "global warming". He has gone so far as to circulate a draft of a major environmental treatise that lays the blame for 'the bulk of global warming' on humans.

In fact, a major peer-reviewed study proves that the majority of scientists in the field are skeptical that global warming is a crisis and, further, that humans are to blame.

In fact, meteorologist Joe Bastardi recently published two charts and begged the Pontiff to review them.

One thing is clear: Barack Obama has found a soulmate in Pope Francis and the combined damage these men can do to Western civilization is substantial.

Francis comes from the peron era and was involved in heavy activism steeped in Marxist/communist ideology. That is who he is.
Francis - before being the pope - was cardinal Berglolio (sp) and was a member of Pope Benedict. He was heavily involved leading the coup against Pope Benedict; he was also involved in the scandal of the Vatican bank and money laundering/charges.

He is a globalist, his Vatican nation is heavily involved in the organization, assistance and decision and organization of the current illegal emigration from the middle east into the west with one exception: Christian may not apply!

Francis and his catholic Vatican nation are making millions of dollars with the organized emigration because they get paid 'per head'. In the US - the DC cesspool of corrupt and decepticons approve year after year this shindig - behind closed doors without the voters consent and knowledge, no hearing has ever taken place. This is a more than one billion dollar per year industry and the onslaught of illegal invaders/arrivals is planned in DC while the tools of the "US Conference of catholic bishops' from every constituency as well as other entities located at the UN with the head of the snake 'Maurice Strong' (this name should ring a bell - he's Canadian, one of his buddy is involved in the uranium deals.

These muslims are not all from Syria nor are they all leaving 'due to ISIS' or other crap they make up as they go along. Look at the many pics and one can see that they are overwhelming all young men. They are mostly dressed modern- and current, clean western style clothing.
How can that be that they all look quite healthy, clean and well dressed? One can also see many westerners who accompanying them after organizing them - provide them with food, water and every necessity while on their trek into the west.

Francis came here not based on co-incidence - he came by intent to preach to americans that they have no right to insist on a border and rather need to have an open door at all times taking in all the thousands upon thousand of muslims on their way here.
He did not feel it a necessity to say a prayer before preaching, he never once mention God or Jesus Christ. After his condemnation of narrow minded americans he participated in the globalists plan at the UN by the power brokers who have been planning for a while in how best to get the NWO - beginning with the concocted climate change/wealth re-distribution. Obama is obligating the US taxpayers to 100 billion dollars per year to that corrupt shindig of climate change. The last to know are the American people.
Pope and Obama belong to the elites focused heavily on the destruction of the US.

Francis is on his way back to his Vatican city hidden behind a 10-foot concrete wall to keep the 'riff raff' out and making sure their bank account is swelling a lot this year alone - after all their billions in cash assets are not enough yet!

The President, the Pope, And the Prime Minister: Three Who Changed the World
https://www.goodreads.com/book/show/96122.The_President_the_Pope_And_the_Prime_Minister