MITCH McCONNELL AND BOB CORKER: When the first Iranian terror strike occurs, both of these traitors better run for the hills

The behavior of Mitch McConnell and Bob Corker over the last six months has been nothing less than horrifying. 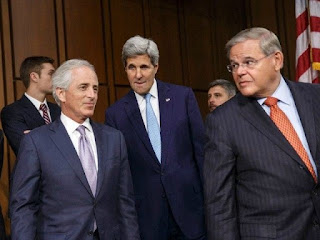 Barack Obama's treasonous Iran deal will -- and there is no debate regarding this -- reward the world's leading state sponsor of terrorism with upwards of $150 billion. China and Russia are champing at the bit to sell Iran as many advanced weapon systems as they can.

Corker and McConnell ceded the Senate's Constitutional powers to approve any treaty by reversing the balance of power. Instead of the president requiring two-thirds of the Senate, a Corker (read: McConnell) bill reversed the equation. It's called "Failure Theater": pretend to oppose Obama's radical policies while actually supporting him.

I was interested to find out why. This is a life and death matter. Iran's incessant chants of "Death to America" make that much clear. Why would these ostensible "Republicans" allow such a nightmare to proceed?

Follow the money. Who are the most recent donors to Mitch McConnell?

1. Blackstone Group ($185,800) - Blackstone Group has multiple subsidiaries that have done business recently with Iran, including TravelPort and TRW. Earlier this year, Blackstone was asked whether it would invest in Iran after the Obama nuclear deal, it denied having immediate interest ("it'll be a while").

2. Goldman Sachs ($113,325) - GS entered the uranium market in 2009 and its associated business unit (NUFCOR) has been involved in Iran's uranium deals since the seventies. In 2007, GS listed Iran among its most promising emerging markets, citiing opportunities in energy, human capital and technology.

4. JPMorgan Chase ($97,075) - in 2011, JPM paid $88.3 million in fines over a series of financial transactions related to Cuba, Iran and Sudan. JPM is also involved in litgation with victims of the 1983 Marine Corp barracks bombing in 1983 through Italian bank Clearstream. JPM has a waiver from the Treasury Department to do business with Iran.

10. General Electric ($74,995) - GE has had a long, sordid history of business dealings with Iran. More recently, The Street reported that GE has a "head start in Iran" that could result ina "bonzanza of new access to an economy eager to buy everything from the newest cell phones to the most modern oil production equipment". GE has a waiver from the Treasury Department to do business with Iran.

11. Citigroup ($70,400) - $1.75 billion from Iran was "discovered" in a Citibank account. Citigroup has a waiver from the Treasury Department to do business with Iran.

9. Hercules Holding ($40,000) - Hercules has a waiver from the Treasury Department to do business with Iran.

If Iran kills a single American in the future, these men should face a firing squad.

When you look at the money involved(and admittedly,this is only the money we know of,'legal contributions' and not the under-the-table 'contributions'),what surprises me most is just how little money it takes to buy these guys.It's chilling that for these amounts,you can do things legislatively that corrupt and endanger millions of lives and the nations that depend on our 'leaders' to do what's right.In this time,the safe,conventional choices could destroy the world as we now know it.

I was thinking the same thing. This is small change for such a dangerous course of action. I am stunned that so little money buys so much.

I agree with the firing squad. Americans will die because of this insanity.

this explains it. it is revolting how corrupt our government has become.