Steven A. Camarota, writing at the Center for Immigration Studies, has some astoundingly useful data to help inform the 2016 Presidential election. Using Census Bureau data, a comprehensive study examined welfare use by all immigrant households.

The executive summary: roughly two of every three illegal immigrant households are dependent on one or more types of welfare payment. And more than half are on Medicaid. 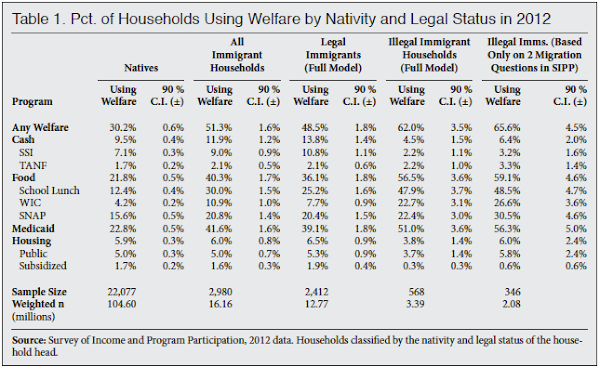 ...The overwhelming majority of illegal immigrants have modest levels of education; therefore, the high use of welfare associated with less-educated legal immigrants indicates that legalization would likely increase welfare costs, particularly for cash and housing programs...

But remember, folks: according to the loathsome Tom Donahue and the Chamber of Crony Capitalism, these unvetted welfare recipients are here to do the work Americans won't do.

In the past, any immigrant who became a public charge could be deported. For an immigrant to enter the USA someone had to support them, if they didn't that individual had to sink or swim.


I suggest we deport all those immigrants who are public charges. And if there are those who oppose it they can pay for these immigrants through voluntary tax increases that they must pay or forfeit their personnal assets.

Who can justify tens of millions of illegal and legal immigrants who are forever dependent on taxpayers?

The study is bunk. It conveniently forgets to mention that the money goes to the children who are US citizens because they were born here after their parents were induced to cross the border by BUSINESSMEN. If you want to end immigration...jail the businessmen. But that would end campaign contributions to the Republican Party, now wouldn't it?