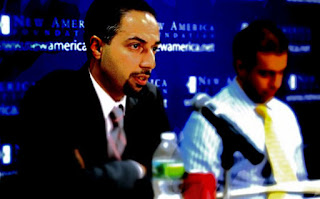 A prominent Iranian dissident has exposed the extensive commercial and political links between National Iranian American Council (NIAC) and a number of key figures in the Iranian regime, including current President Hassan Rouhani and Foreign Minister Javad Zarif.

Writing in the Daily Beast under the pseudonym “Alex Shirazi,” the dissident – who concealed his identity out of fear of reprisals against his family in Iran – chronicled NIAC’s evolution within the broader ambitions of the Namazis, a little-known but influential Iranian family that first rose to prominence under the Shah and returned to Iranian public life following the death of Ayatollah Khomeini in 1989. Under the 1989-97 Presidency of Hashemi Rasfanjani, who combined doctrinal orthodoxy with an eye for a smart deal, the Namazis were again in their element. Writes Shirazi:

In 1993, Pari Namazi and her husband Bijan Khajehpour founded a company in Tehran called Atieh Bahar Consulting (AB). It offered a range of legal and industrial services to foreign enterprises, most importantly the access it provided to the regime, and the advice it dispensed on how best to navigate the vagaries of the regime’s entrenched factions and competitive interests.

Continued American sanctions against Iran blunted the Namazis goal of bringing international business back to Iran, though the family profited from its association with Rafsanjani and his relatives. Not much changed during an ensuing decade that was dominated by the presidency of Mahmoud Ahmadinejad, who accelerated Iran’s uranium enrichment activities at the same time that Iranian forces were supporting Shi’a militias against U.S. troops in Iraq.

During this time, Bijan Khajehpour developed a relationship with Hassan Rouhani, a former nuclear negotiator for the regime with slowly growing political influence – Rouhani’s 2013 election was a major boost for the Namazi family. Meanwhile, Bijan’s relative Siamak Namazi had already teamed up with Trita Parsi, a Swedish-Iranian academic and political activist who presently heads NIAC. Urging political dialogue and educational exchanges between the U.S. and Iran, Namazi and Parsi’s efforts culminated in the creation of NIAC in 2001. At the same time that Parsi was at NIAC’s helm, writes Shirazi, he continued to work as a paid consultant for the Namazis’ company.

While serving as president of NIAC, Parsi also wrote intelligence briefings as an “affiliate analyst in Washington, D.C.” for AB, focusing on such topics as whether or not the American Israel Public Affairs Committee (AIPAC) would revive its anti-Iran campaigning on the eve of the Iraq war, or on efforts by the Mujahideen-e Khalq (MeK), the militant Iranian opposition group that exposed Natanz in 2002 would get itself de-listed as a terrorist entity by the U.S. State Department. Parsi was paid for his work for the consultancy, as disclosed by an email sent from Bijan Khajehpour to him, dated Sept. 22, 2002, an employment that Parsi did not mention when fulsomely praising Khajehpour in the Huffington Post as an ideal Iranian businessman.

Although it has only 5,000 dues-paying members, a mere one percent of the estimated 470,000 Iranian-Americans, NIAC’s network of activists and event attendees is said to extend into the tens of thousands. In June of this year, as the Iran deal looked likely, NIAC inaugurated an official “lobbying” arm called NIAC Action registered with the Internal Revenue Service as a 501(c)(4) organization, but for years, internally, the group has described its activities (PDF) as lobbying. NIAC Action is explicitly meant to counter the influence of AIPAC, which has spent millions to block the Iran deal’s passage in Congress…

Shirazi also quotes Carl Gershman, the president of the Congressionally-financed National Endowment for Democracy, as regretting a decision to fund NIAC and its Iranian partner Hamyaran, a regime-sanctioned NGO, to the tune of $200,000 between 2002 and 2006. Said Gershman,

We weren’t aware when these grants were made that NIAC were presenting themselves as a lobby. We didn’t know that. Our effort was to work with emerging space in Iran. We were trying something that might be a way to help people on the inside. But that quickly became unworkable; the grant didn’t work. Then NIAC showed itself as a lobby organization, so we have nothing to do with them anymore.

During the Obama Administration’s second term, NIAC has nonetheless emerged as a notable influence on Iran policy, with Parsi openly touting his connections to the regime’s foreign minister, Javad Zarif. Explains Shirazi,

Parsi and NIAC found themselves in the unlikely position of power brokers. One prominent faction of the Iranian regime—Rafsanjani’s—sees them as convenient conduits for disseminating a pro-Iranian line in U.S. politics, while the “hardline” Iranian security services have classified their activities as benign to the interests of the Islamic Republic.

The U.S. government, meanwhile, has adopted many of NIAC’s talking points. Both Parsi and Atieh International, one of the companies in the Atieh Group, were fixtures on the sidelines of the Geneva and Vienna negotiations between the P5+1 and Iran. In fact, Atieh International held a joint briefing with NIAC at the Marriott in Vienna on June 29 to discuss a most pressing topic—renewed economic possibilities for the West once a deal was inked. The speakers were Bijan Khajehpour and Trita Parsi.

The Namazis’ alignment with Rafsanjani and Rouhani can now pay off. Because they were attacked so often and sometimes so viciously by “hard liners”—the very Iranian officials the Obama White House claims constitutes the only Iranian opposition to the nuclear deal—the Namazis and NIAC, the think tank and lobby they helped create, have gained great renewed credibility in the West, even promoting the idea that they can liberalize what remains by and large a fanatical theocracy and a fiercely competitive kleptocracy. At the same time, they can present themselves in today’s Iran as the best go-betweens with, well, with the not-so-Great Satan, who loves to listen to their advice.

Despite these connections to senior figures within a regime whose slogan is “Death to America,” NIAC officials like its Research Director Reza Marashi have taunted Jewish opponents of the Iran nuclear deal with the smear of dual loyalty. After Sen. Chuck Schumer (D-NY) came out against the deal, Marashi accused him of putting “Israel’s interests before America’s interests.”

NIAC’s targeting of its critics has also landed the lobby group in legal hot water. In March this year, NIAC was fined $200,000 by a judge who found that “in the process of suing blogger Hassan Diaoleslam, a critic of the group, [NIAC] had “‘flouted multiple court orders.”