TO BE A MUSLIM OR NOT TO BE: By His Works Ye Shall Know Him 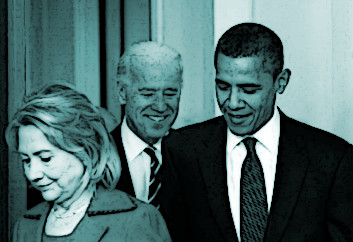 Republican presidential contender Donald Trump has said many contentious things before and during his candidacy and has gain considerable traction among the electorate, methinks, because he said many things that are on people’s minds that they are afraid to say themselves. Trump, with his repetitive denunciation of political correctness, has become their microphone.

But it was what he did not say to a questioner at a rare, for him, town hall meeting, that has gotten him in failure this time being roundly condemned for not slapping down a questioner who asked about Islamist training camps that are operating in the U.S., prefacing that with a question on whether Barack Hussein Obama is, as many suggest, a closet Muslim. Trump says he didn’t hear the first part, responding that he would look into the training camp issue.

There is a saying, a Christian saying, that by their fruits ye shall know them, and if President Obama is not a Muslim, he has given us every reason to think he is.

One of the very first thing he did as President was to give a speech to students in Cairo in 2009 in which he apologized for America’s role as the world bully, particularly in the Islamic world, and for our support of our only true ally in the Middle East. His snubbing of both Israel and its Prime Minister, Benjamin Netanyahu, has not been Subtle and his push to make Iran a nuclear power, in opposition to the will of Congress and the American people, shows just where his heart lies.

After the terrorist attack on our diplomatic mission in Benghazi, President Obama went out of his way, helped by Secretary of State Hillary Clinton and U.N. Ambassador Susan Rice to blame, not Islamic terrorists, but an amateur video deemed offensive to Muslims which was also said to have prompted “spontaneous” riots in Cairo, issuing a formal apology. As Investor’s Business Daily (IBD) editorialized:

Yet that is what the U.S. Embassy in Cairo did.

"The Embassy of the United States in Cairo condemns the continuing efforts by misguided individuals to hurt the religious feelings of Muslims — as we condemn efforts to offend believers of all religions," the statement read in part. It went on to say that the U.S. "firmly reject the actions by those who abuse the universal right of free speech to hurt the religious beliefs of others."….

This apology is in line with the tone of moral equivalence in the speech President Obama gave to the Arab world in Cairo in June 2009. As part of his famous apology tour, he rued American greatness built by sacrifice of blood and treasure over generations for the freedom of others. If we felt this gave us special privileges, we were sorry, so feel free to kick us.

Obama would later repeat that inflammatory video lie no less than six times in a speech to the United Nations in which he uttered the infamous declaration, “The future must not belong to those who slander the prophet of Islam.

That declaration would seem to include the staff of the French satirical magazine Charlie Hebdo, who were accused of doing just that before a terrorist attack killed eight journalists. The massacre at Fort Hood was "workplace violence," not a jihad terrorist attack by Maj. Nidal Hasan against Western "crusaders."

The lives of the four Jews killed in a kosher market in Paris were dismissed by Obama as "a bunch of folks in a deli" shot "randomly" as they happened to be in the wrong place at the wrong time. Detect a pattern here?

Indeed, I do. Christians are being murdered around the world and little has been done by this administration to help them or even acknowledge the fact or that Islamic jihadists have marked them for genocide. President Obama’s silence on this ongoing slaughter speaks volumes about his true loyalties:

From the Christian-influenced Yazidis in Iraq to the Christian schoolgirls targeted by Boko Haram in Nigeria, Christians worldwide have had their churches bombed and burned and themselves murdered, all because of what they believe and who they are.

Yet, with few exceptions, Obama refuses to acknowledge or even mention this fact. On Sunday, White House press secretary Josh Earnest, who had also expressed the administration's condemnation of the "random" attacks in Paris, issued a statement condemning the IS's murder of 21 Egyptian "citizens." No mention of their being Coptic Christians.

Ft. Hood was “workplace violence”. Benghazi was a spontaneous response to an inflammatory video. Paris was just a case of people being in the wrong place at the wrong time. When world leaders marched in Paris to protest the latest Islamic atrocity, Barack Hussein Obama was conspicuous by his absence.

In Obama’s world Islam is a religion of tolerance, yet he said at an Easter Prayer Breakfast that “…I have to say that, sometimes when I listen to other less-than-loving expressions by Christians, I get concerned.” Not so concerned is he by the mass beheading of Coptic Christians on a Libyan beach by the Islamic State.

The key player in Obama’s administration, which includes appointees affiliated with the Muslim Brotherhood, is of course the Iranian-born Valerie Jarrett. Her role in the Obama administration has been likened to the mysterious Rasputin in the era of the Russian czars:

Her influence is shown by an account in Richard Miniter's book "Leading From Behind: The Reluctant President and the Advisors Who Decide for Him."

It relates that at the urging of Jarrett, Obama canceled the operation to kill Osama bin Laden on three occasions before finally approving the May 2, 2011, Navy SEAL mission. Seems she was concerned about the possible political harm to Obama if the mission failed.

Then there is Huma Abedin, wife of disgraced former congressman Anthony Weiner, and top aide to former Secretary of State Hillary Clinton. She is expected to assume the Jarrett role in a Hillary Clinton White House. Her affiliations and loyalties are also suspect:

Her father is said to be close with the Saudi government's Muslim World League, and her mother is said to be a member of the Muslim Sisterhood. World Trade Center bombing prosecutor Andrew McCarthy wrote in National Review: "The ties of Ms. Abedin's father, mother and brother to the Muslim Brotherhood are both specific and substantiated."

The Muslim Brotherhood took power in Egypt with the Obama administration's approval after it had all but abandoned the government of Hosni Mubarak, a long-time ally and friend. It was while Abedin was advising Hillary that State dropped its long-standing policy of having no dealings with the Muslim Brotherhood.

Is President Barack Hussein Obama a Muslim? By his fruits ye shall know him?

Obama was Born a Muslim.

When you are born to a Muslim father, YOU HAVE NO CHOICE. In this case, Islam is not a choice, it is a brithmark. Being born to an Islamic father makes you a Muslim -- period. Sharia Law ...Obamas Father was a Muslim,..

Therefore Obama was Born a Muslim.

Here is more. Evidence that America would have been smart to heed back in 2008. Back then, even most Republicans wouldn't go there. Sorry to say, there are so many media "talking heads" and GOP Politicians that are STILL refusing to see and talk the truth. You are right. That is why Trump is so popular. Carson too. America needs to wake up - and FAST.

If dear leader barrack would have renounced islam to become a Christian we would know it at the very least it would be in his autobiography. Couple his birth as a muslim and his Indonesia school appication that lists his birth place as Indonesia and his religion as muslim and you have all of the proof that most of us need. Besides show me a madrassah that allows non muslims to go to school there, ain't gonna happen.