RFK, Theodore White, and the Great Debate over Immigration 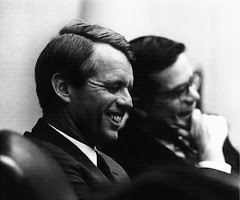 In 1968, when Robert F. Kennedy was a senator from New York campaigning for the presidency, he frequently made a call to idealism that survives as a quotation vividly tied to his memory: "Some men see things as they are and say, why? I dream things that never were and say, why not?"

Over the past several months, as I researched the transformative 1965 Hart-Celler Immigration Act to write the paper we will release Thursday at the National Press Club, I thought often of Kennedy's famous quote.

The Hart-Celler Act was an expression of a national commitment to ideals that had been contradicted by the blatantly discriminatory immigration policy Congress adopted 41 years earlier. Under that earlier legislation immigrants were admitted not according to merit, but under a system that issued visas on the basis of national origin.

As Kennedy wrote in a 1964 letter to the New York Times: "This national origins system was conceived in a spirit of mistrust of certain racial groups, in southern and eastern Europe and elsewhere. ... It violates our basic national philosophy because it judges individuals not on their worth, but solely on their place of birth."

The Hart-Celler Act is a historic example of American leaders who saw injustice in our national civic life and took action eliminate it. But its legacy illustrates the unintended consequences that reforms can produce when they are shaped by other, less noble agendas and driven by a sense of urgency that renders advocates unable or unwilling to look beyond anticipated benefits and to probe potential costs.

Convinced of their good intentions and driven by idealism and political interest, the Congress that passed the Hart-Celler Act and the president who signed it failed to anticipate how it would create a system of mass immigration that continues to transform the country a half century later.

In his 1964 letter to the Times, Kennedy insisted that the legislation "would increase the amount of authorized immigration by only a fraction." Meanwhile, his brother, Sen. Edward Kennedy, who skillfully managed the bill to passage, told his colleagues, "It will not upset the ethnic mix of our society."

Both those predictions had proved to be erroneous by 1982, when journalist Theodore White called Hart-Celler "noble, revolutionary — and probably the most thoughtless of the many acts of the Great Society."

Robert Kennedy gave poetic expression to liberal idealism to right historic wrongs. He was the voice of the liberal vision of the redemptive benefits to be achieved by the reform. Theodore White warned about the dangers of ignoring the lessons of history. He feared that Hart-Celler had created an epoch of immigration that was dangerous in its size and sweep.

Today liberal idealists, unconstrained in their enthusiasm and convinced of immigration's benefits, still call for more. Conservative skeptics, shaped by the constrained vision that emerges from their study of history and human nature, still call for less. They are part of our ongoing, fateful "Great Debate".

The Kenedies were a disaster for America. Truth was a stranger to them. No wonder Dems embrace them so.

NyC posting!
I want to encourage one to continue your great posts, have a nice afternoon!