It's hard to overstate the impact on national security of what is commonly known as "The OPM Hack". The secret files of 22 million individuals who have applied for security clearances -- maintained by the Office of Personnel Management (OPM) -- was ripped off as cleanly as Michael Moore stealing cookies from a Girl Scout. 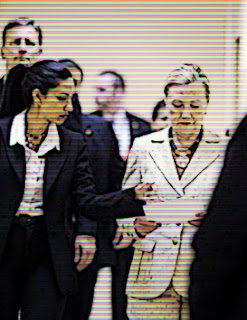 WHAT WAS THE 'OPM HACK'?

Every person who applies for a security clearance fills out an electronic application called an EQIP or EPSQ, which are questionnaires of applicants.

Those applying for a Top Secret clearance must answer an extremely detailed questionnaire delving into every aspect of their personal life: marital affairs, drug use, criminal activity, and any other bit of information that foreign intelligence services might use to blackmail or compromise a cleared individual.

All of those files were stolen by Red China.

The OPM hack has been so devastating to clandestine operations, including NOCs (agents operating under non-official cover), that the CIA just pulled its agents from Beijing "for their safety".

Virtually every current and future military and intelligence operation was put at risk by the OPM hack.

100% CERTAIN THAT HILLARY'S SERVER WAS COMPROMISED BY CHINA

Today the FBI has admitted they are investigating what other cyber security experts had already acknowledged: it is virtually certain that Hillary Clinton's bathroom email server had been compromised by foreign entities.

“In my opinion there is a 100% chance that all emails sent and received by her, including all the electronic correspondence stored on her server in her Chappaqua residence, were targeted and collected by the Russian equivalent of NSA,” said former CIA case officer Jason Matthews, an expert in Russian intelligence.


Kelly asked, "What do you think the odds are that the Chinese, the Russians hacked into that server and her e-mail account?"

"Yep. Likely. They're very good at it. China, Russia, Iran, potentially the North Koreans. And other countries who may be 'our allies' because they can."

HILLARY AND HER OPERATIVES KNEW HER BATHROOM EMAIL SERVER WAS INSECURE

In the most recent email dump, today we discovered that Clinton consigliere Cheryl Mills warned Hillary that use of her bathroom server was unprecedented and dangerous.

n A June 4, 2011 email chain between Hillary Clinton, her Chief of Staff Cheryl Mills and senior aides Huma Abedin and Jake Sullivan, all of whom used private email accounts, and in Clinton and Abedin's case, Clinton's secret server, Mills admits she was "someone who attempted to be hacked," and warned against telegraphing the use of private email, as it "may encourage others who are out there."

It is clear that everyone involved with the Clintons knew that they were violating the law and endangering U.S. national security.

Even with the limited number of emails we've seen, the State Department revealed that over 400 messages on Hillary's personal email server were classified.

Each violation constitutes a felony subject to imprisonment for up to 10 years.

As Democrat operative James Carville admitted earlier this year, Hillary employed a personal email server in order to avoid public scrutiny of her actions, be they her cash-for-favors deals, mishandling of classified data, or other illegal activities.

My contention is that Hillary Clinton's use of a bathroom server led directly to the OPM hack, which cyber experts have called "a digital Pearl Harbor."

Here's how the attack chain worked from the perspective of the People's Liberation Army (PLA).

2. PLA operative sends emails to various government officials using the accounts of HRC, Huma Abedin, Cheryl Mills or another senior official. Nothing gets the attention of a government apparatchik like an email from the likes of Hillary.

3. The emails contained a spear-phishing link with instructions to click on the link (e.g., "please check out these travel plans and see if they sync up with your schedule") that installed malware on the targeted device. Predicted click-through rate: 70%+.

4. Targeted device is infected and then used to launch attacks inside applicable government network. These attacks take the form of reconnoitering on the compromised device (reading documents, emails, network drives, etc.); performing reconnaissance on the government network, and launching additional attacks.

In short, compromising Hillary's email server was a gold mine for foreign intelligence agencies.

I can assure you we haven't heard the last of tragic, needless compromises of America's national security due to Hillary Clinton's voracious lust for power and money.

There is no doubt that her server was hacked by other foreign intelligence outfits. The hacker 'Guccifer' was the first one hacking her emails between Sid Blumenthal and Hillary/Aides because he published several emails online. It was also the beginning of the exposure of Hillary using a 'private' server while using 'McAfee' software as protection.
Think about that and one wants to laugh so hard although this is serious business.

On 6 September Hillary and her legal team met with this president and his legal team regarding these emails. (reported by DC Whispers)
It has been discovered that this administration sent Hillary 'top and classified security/key hole dealing with nuclear issues and findings as well as satellite national security gathered.
Hillary deleted this emails - top security classified information - it was part of the claimed 30,000 'deletions.

It's one thing to remove the national security headers from emails and re-writing this info while sending it to Hillary's server. Yet - the content alone should have raised many eye brows. "McAfee" was all her server had as protection!

It is also a fact that this administration sent lots of info to Hillary's server. Forthem to claim they were unaware does not ring true.