Approximately 104,460 asylum seekers arrived in Germany during the month of August, setting a new record. That makes 413,535 registered refugees and migrants coming to Germany in 2015 so far. The country expects a total of around 800,000 people to seek asylum in Germany this year. And that’s just Germany. The entire continent of Europe is being inundated with refugees at a rate unprecedented in world history. This is no longer just a “refugee crisis.” This is a hijrah. 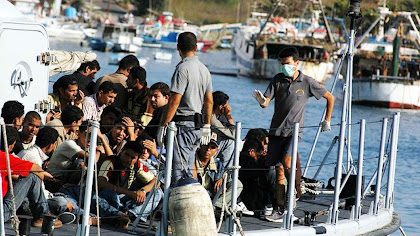 Hijrah, or jihad by emigration, is, according to Islamic tradition, the migration or journey of Muhammad and his followers from Mecca to Yathrib, later renamed by him to Medina, in the year 622 CE. It was after the hijrah that Muhammad for the first time became not just a preacher of religious ideas, but a political and military leader. That was what occasioned his new “revelations” exhorting his followers to commit violence against unbelievers. Significantly, the Islamic calendar counts the hijrah, not Muhammad’s birth or the occasion of his first “revelation,” as the beginning of Islam, implying that Islam is not fully itself without a political and military component.

To emigrate in the cause of Allah – that is, to move to a new land in order to bring Islam there, is considered in Islam to be a highly meritorious act. “And whoever emigrates for the cause of Allah will find on the earth many locations and abundance,” says the Qur’an. “And whoever leaves his home as an emigrant to Allah and His Messenger and then death overtakes him, his reward has already become incumbent upon Allah. And Allah is ever Forgiving and Merciful.” (4:100) The exalted status of such emigrants led a British jihad group that won notoriety (and a shutdown by the government) a few years ago for celebrating 9/11 to call itself Al-Muhajiroun: The Emigrants.

And now a hijrah of a much greater magnitude is upon us. Evidence that this is a hijrah, not simply a humanitarian crisis, came last February, but was little noted at the time and almost immediately forgotten. The Islamic State published a document entitled, “Libya: The Strategic Gateway for the Islamic State.” Gateway into Europe, that is: the document exhorted Muslims to go to Libya and cross from there as refugees into Europe. This document tells would-be jihadis that weapons from Gaddafi’s arsenal are plentiful and easy to obtain in Libya – and that the country “has a long coast and looks upon the southern Crusader states, which can be reached with ease by even a rudimentary boat.”

The Islamic State did not have in mind just a few jihadis crossing from Libya: it also emerged last February that the jihadis planned to flood Europe with as many as 500,000 refugees. Now the number is shooting well beyond that in Germany alone. Of course, not all of these refugees are Islamic jihadis. Not all are even Muslims, although most are. However, no effort whatsoever is being made to determine the refugees’ adherence to Sharia and desire to bring it to their new land. Any such effort would be “Islamophobic.” Yet there are already hints that the Islamic State is putting its plan into effect: jihadis have already been found among the refugees trying to enter Europe. There will be many more such discoveries.

Eight hundred thousand Muslim refugees in one year alone. This will transform Germany, and Europe, forever, overtaxing the welfare economies of its wealthiest nations and altering the cultural landscape beyond recognition. Yet the serious public discussion that needs to be had about this crisis is shouted down by the usual nonsense: the Washington Post Wednesday published an inflammatory and irresponsible piece likening those concerned about this massive Muslim influx into Europe to 1930s Nazis ready to incinerate Jews by the millions. Hollywood star Emma Thompson accused British authorities of racism for not taking in more refugees – as if British authorities haven’t already done enough to destroy their nation.

And so it goes. If you don’t accept the brave new world that is sure to bring more jihad and more Sharia to Europe, you’re a Nazi and a racist. Meanwhile, no one is bothering even to ask, much less answer, one central question: why is it incumbent upon Europe have to absorb all these refugees? Why not Saudi Arabia or the other Muslim countries that are oil-rich and have plenty of space? The answer is unspoken because non-Muslim authorities refuse to believe it and Muslims don’t want it stated or known: these refugees have to go to Europe because this is a hijrah.

This is also Europe’s death knell.