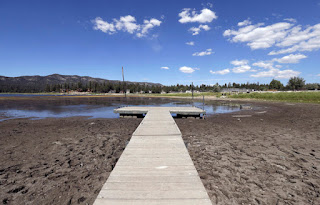 HIGH AND DRY: The lake bed where water has dried due to the drought at Big Bear Lake, Calif. California cities cut water use by a combined 31 percent in July, exceeding the governor’s statewide mandate to conserve, officials said Aug. 27. The strong water conservation figures show California residents are beginning to understand the dire need to cut back in a fourth year of drought, Felicia Marcus, chair of the State Water Resources Control Board, said. (AP)
I was walking through downtown Sacramento recently when raindrops started falling. People on the street stopped dead in their tracks, looked up at the sky and began acting giddy. “What’s that?” I asked a man. “I think it’s something called rain,” he responded. Such is the gallows humor in a state that hasn’t seen substantial rainfall in years.

The obvious lack of rain is the seemingly obvious reason for the state’s lack of sufficient water. Water levels in state reservoirs are falling, officials are cracking down on “excess” water use (lawn-watering, etc.), and voters passed a water bond on the 2014 ballot to help fund more storage. The Capitol crowd is obsessed with the water issue, while local planners use the crisis to clamp down on building permits.

State officials say California’s drought is “one of the most severe droughts on record” and they warn that even an El Nino rainy season is unlikely to fix the situation. In fact, nothing seems to fix the situation. Californians have slashed their water use by 31 percent during July — well above the 25-percent reduction targeted by the governor. And there’s still not enough water.

But as this Watchdog series will show, California’s drought is largely a man-made crisis. It is caused by a series of policies — some from the past, many that are ongoing — which has prioritized environmental demands above the basic provision of water resources to the public. More than half of the state’s water resources simply flow out the San Francisco Bay to the Pacific Ocean.

Even now, in the Sierra foothills state officials empty reservoirs to protect “unimpeded” river flows to benefit small numbers of non-endangered hatchery fish. The California Coastal Commission, the powerful agency with control of development along the shoreline, is holding up a privately planned desalination plant over concerns about its impact on plankton. The environmental-friendly commission want to force the developers to build a pumping system that destroys the economics of the plant.

Meanwhile, slow-growth activists see opportunity in the drought. Their goal is to stop new developments despite California’s growing population, so a lack of water is a useful tool in their arsenal. A state law forces developers to prove sufficient water resources for decades into the future — before being able to get a permit to build developments. This slow-growth lobby sees no reason to come up with water-storage solutions.

Even the federal government is in on the action. In the far northern part of the state, along the Klamath River, federal environment officials want to remove four dams that have provided water storage near the Oregon border. Their goal is to help preserve the habitat of non-native salmon. The “destroy the dams” movement had gained so much steam in recent years that San Franciscans were asked in a 2012 advisory vote to destroy the O’Shaughnessy dam in Yosemite National Park and drain the Hetch Hetchy Reservoir — the main source of water for the state’s third-largest city. Even that city’s notoriously lefty voters said “no” to shutting their main water spigot.

If one takes a map of the state of California and turns it on its side, with the Pacific boundary at the bottom, it’s easy to better understand the state’s water geology. Water flows from the Sierra Nevada Mountains through rivers that head toward San Francisco Bay. It all ends up in a place called the Sacramento-San Joaquin Delta, the West Coast’s largest estuary. That’s near the lowest point in your sideways map. Then it heads to the bay and, then, the ocean.

When you hear Californians argue about the Delta, that’s what they are talking about. It’s a 1,100-square-mile area with 1,000 miles of rivers filled with historic towns, orchards, swamps, islands and marinas. That estuary serves as a giant water filter. Primarily, the mighty Sacramento River meanders through the delta, kept within its banks by a series of aged dirt levees. A pumping station at the south end near Tracy sends water along a system of canals to farmers in the San Joaquin Valley — and also to the Southern metropolises.

During wet years, the estuary is filled with fresh water. During droughts, the salinity levels are high as water from the Pacific migrates eastward. That region remains Ground Zero for the state’s water fights. The fate of a tiny baitfish called the Delta Smelt is central here. Occasionally, a few dead smelt are found at the fish screens in Tracy, which causes administrators to shut down water supplies from the Delta toward the south. Water supplies are also stopped during drought years.

In 1982, our past and current governor, Jerry Brown, wanted to build a peripheral canal that would bypass the crumbling levees and take Sacramento River water around the Delta — before heading to the farm and urban water users. The state’s voters rejected that measure. Southern Californians were mostly indifferent to the idea, but Northern Californians resented having more of “their” water sent away.

Gov. Jerry Brown’s latest plan is to build twin tunnels under the Delta to provide a more consistent water supply southward. The planned cost: $25 billion for the total project, with a separate portion geared toward environmental restoration. Northern Californians are still mostly against it, as they claim it’s a water grab by Los Angeles-based users. (To understand the emotions, watch “Chinatown,” the 1974 movie about the deceptive way Owens Valley water was diverted to the Southland to spur the growth of Los Angeles’ San Fernando Valley).

Looking deeply into the plan, this much is clear: The newly renamed “California Water Fix” doesn’t even promise more water to southern cities. It simply promises a more consistent water supply. The twin tunnels are designed to change the flow of the rivers and protect the Delta Smelt. With the smelt protected, there will be fewer reasons to shut the pumps. In other words, this is a costly engineering solution to a political problem.

And therein lies California’s main water problem. No one here denies the importance of the environment or that some portion of the state’s scarce water resources needs to be used to protect wetlands and river habitats. But the balance of power has shifted from those who believe that people come first to those who seem to view the population as a scourge.

In April, I reported on a contentious meeting at the Oakdale Irrigation District east of Modesto. Farmers and local residents were aghast. The state and federal officials insisted on releasing massive amounts of water from the large New Melones Reservoir and Lake Tulloch, a small lake downstream from New Melones surrounded by homes. As the governor was threatening fines for people who take long showers, his State Water Resources Control Board was going to empty reservoirs to save about a dozen fish.

The local farmers and residents were asking for a temporary reprieve. I remember the words of one of the district officials, who was calling for “off ramps” during times of severe drought. That’s jargon for temporarily putting aside some of the more aggressive environmental demands at a time when farms and people are out of water. Bad publicity delayed the “pulse flows,” but by September water officials began insisting on new releases.

Recent reports showed that farmers use 80 percent of California’s water resources. It’s true that farmers are an important interest group. And because of the state’s old and quirky system of water rights, we see infuriating misuses of resources — e.g., farmers growing water-intensive hay in one of the driest regions on Earth, the southern Imperial Valley.

But that 80 percent number was deceptive because it completely omitted environmental uses of water, which comprise more than 50 percent of the state’s flows. Farmers, businesses and residents fight over what remains. What we’re seeing — water releases to benefit a small number of common fish, removing dams along major rivers, delays of desalination plants, failure to build adequate water storage — is not an anomaly. It is the cumulative effect of water policies dominated by environmental interests.

It wasn’t always this way. In earlier days, California’s water policies had more in common (and with some admittedly ill environmental effect) with the ideas of capitalist defender Ayn Rand than John Muir, the famed naturalist whose environmental legacy dominates California discussions. California leaders were proud of taming the wilderness and building massive infrastructure projects — especially water projects — that allowed the state’s phenomenal growth.

Begun in 1961, when Brown’s dad, Pat Brown, was governor, the State Water Project was begun. “The project includes 34 storage facilities, reservoirs and lakes; 20 pumping plants; four pumping-generating plants; five hydroelectric power plants; and about 701 miles of open canals and pipelines,” according to a state description. “The project provides supplemental water to approximately 25 million Californians and about 750,000 acres of irrigated farmland.”

I’ve toured a lot of the facilities and even was on an official tour of the Colorado River project, following the water as it flowed from reservoirs behind New Deal-era dams at the Arizona border down to the treatment facility in the Los Angeles. It was quite a feat to build these projects. As I argued in my Orange County Register column at the time, it could never be replicated today in a world of Environmental Impact Statements, greenmail lawsuits filed under the California Environmental Quality Act and a political system dominated by officials more interested in quashing human development than providing the means for humans to thrive in this arid climate.

Sure, it would help if it rained — but the lack of rain is the least of California’s drought problems.

It's not very accurate to refer to the crazies as environmentalists, as time and again it has been proven that the environment is way down on their list of priorities. They claim the mantle of being pro-environment, but the reality is that they are first and foremost, anti-human, with anti-business coming in close at second place.