Writing at The Washington Times, L. Todd Wood relays excerpts of a startling new book by a German reporter who was able to embed himself with ISIS for nearly two weeks. What he found should raise the hair on the back of your neck: 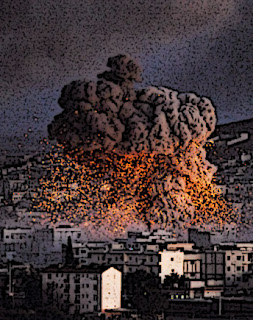 Nuclear annihilation across the globe. This is what a German reporter who successfully embedded with the Islamic State says the terror group is planning. Jurgen Todenhofer released his findings in a book titled “Inside IS - Ten Days in the Islamic State,” reports the UK’s Daily Express.

“The terrorists plan on killing several hundred million people. The west is drastically underestimating the power of ISIS. ISIS intends to get its hands on nuclear weapons,” says Todenhofer, calling the group a “nuclear tsunami preparing the largest religious cleansing in history.”

“They now control land greater in size than the United Kingdom and are supported by an almost ecstatic enthusiasm the like of which I’ve never encountered before in a war zone. Every day hundreds of willing fighters from all over the world come. They are the most brutal and most dangerous enemy I have ever seen in my life. I don’t see anyone who has a real chance to stop them. Only Arabs can stop IS. I came back very pessimistic.”

With the ink not yet dry on the “Iran nuclear deal,” Middle Eastern states opposed to Persian domination of the region now are actively pursuing a nuclear weapons capability of their own. President Obama’s deal could literally mean an arms race that could lead to nuclear devastation as Saudi Arabia and others look to get the bomb as well to counter Iran. With more countries obtaining nukes, the greater the possibility terrorists could obtain a weapon, which could be used to attack Israel or the West.

Not to worry, however: we found out today that President Selfie-Stick has hired some of his pals in Hollywood to fight back.

They will use "HBO, Snapchat, and a controversial, Oscar-winning screenwriter to help [the U.S.] fight ISIS]".

Don't know about you, but I just breathed a big sigh of relief.

No sweat, they're just the JV team-yaknow, putting on Kobe's jersey doesn't make them formidable or nuthin.
MM

I wonder, can Obama ever be held to account? I know it's almost rhetorical because being a REgressive mean never having to say you're sorry but at the point of our enemies getting and using nukes, doesn't SOMEONE have to own it????