No Refugees, No Terrorism 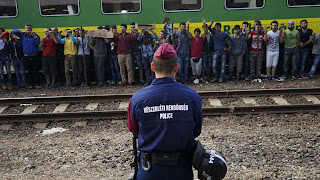 Jordan’s Queen Rania told Europeans that they could either take in the Syrian refugees that her country doesn’t want or the refugees would turn to terrorism. And what if these “refugees,” like so many of the other Muslims who had settled in Europe over the years, decide that they like terrorism anyway?

A tenth of London approves of ISIS now. Support for the Islamic State among the younger population in the UK, where Muslim demographics predominate, reaches as high as 14 percent.

What will it look like when tens of thousands of Muslims from the homeland of the Islamic State are added to the population? How much support will there be for Islamic terrorism a decade from now when the mass Muslim migration has fundamentally reshaped the UK’s religious demographics?

A recent poll of Syrians showed that 22 percent believed that ISIS had a positive influence on their country. And that’s only the level of support for the most controversial Jihadist group there. They haven’t bothered to measure the level of support for more “moderate” Jihadist groups like the Al-Nusra Front, which is linked to Al Qaeda, or even the Islamic Front, whose components were included in the Free Syrian Army. The Sunni rebels backed by the West are universally Jihadist fighting forces.

Even the New York Times admitted that, “Nowhere in rebel-controlled Syria is there a secular fighting force to speak of.”

How much support do the Sunni rebel groups have among the refugees? 1 out of 5 would be bad enough, but the numbers for the entire Sunni Jihadist opposition are likely to be a lot higher.

And these Jihadist groups are terror risks almost as much as ISIS. A Syrian migrant at the Gates of Hungary was caught musing, “If the Free Syrian Army was here, they’d shoot that helicopter down.”

But plenty of FSA fighters are already in Europe or on the way there. How many of them will turn to terrorism in Europe? Even one is too many. But Europe is expected to take them in and find out later.

Muslim refugees in the United States have been a consistent vector for terror. Taking in tens of thousands more just makes the problem even worse.

No amount of “preventing violent extremism”, outreach, profiling, airport scanning and mosque surveillance will ever be enough as long as immigration provides fresh recruits for the Jihad.

UNHCR refugees with terror ties have already been caught by Norway. More are being found in Europe. But even if you could somehow catch all the terrorists, there is no way to intercept future terrorists who will only turn to Islamic violence once they are safely living in Europe.

Instead of doing the sensible thing, European countries are not only taking in “refugees”, but they’re even taking back Muslims from Europe who went to join in the fighting in Syria before deciding to come back. Not only is Europe taking in unknown terrorists, but it’s taking in known terrorists and trying to reeducate them out of their “extremism” before they go off on another killing spree.

But the surest way to stop them from killing isn’t to have some blonde social worker accompanied by a Taqiyya Imam preach to them about “moderate” Islam. It’s to keep them out of the country.

And that’s something Queen Rania knows. Even as she lectures her European hosts on labeling the Muslim migrants with “with blunt pejoratives, as if some lives have lesser value than others. Invaders. Marauding foreigners”, her country has worked hard at keeping down its own Muslim brethren.

Her Hashemite Kingdom, a foreign transplant, has done everything it could to disenfranchise and expel the Palestinian Arabs who, unlike her husband’s family, actually belong there. Generations of Muslims have lived in Jordan without ever receiving citizenship. There are hundreds of thousands of stateless children in Jordan. Instead of taking them in, Jordan stripped citizenship from 1.5 million “Palestinians”.

But the refugees risk tilting the demographic balance in Jordan toward a Muslim Brotherhood takeover.

Jordan doesn’t want Palestinian Arabs or Syrians because it fears terrorism, violence and a takeover. Instead its rulers would like Europe to accept those risks while lecturing it on its intolerance for refusing to commit suicide. Jordan, like its Saudi masters, wants Europe to take in the Muslims that it fears.

Jordan and Turkey may have been forced to host huge numbers of Syrians, but they aren’t giving them citizenship the way that America, Canada and Europe are expected to. Turkey calls its 2 million refugees “guests”. Jordan tries to use the UN to move them out as fast as possible to European countries.

Muslim countries claim to care a great deal about their Palestinian Arab brethren, but no Muslim country has been willing to take them all in permanently. The same is true for the Syrian Arabs. Instead they are being calculatedly transformed into a stateless people to be inflicted on the gullible West.

Why are we expected to permanently take in Muslims that the Muslim world doesn’t want?

What does the Muslim world know that we don’t? It knows that no refugees means no terrorism. After the Gulf War, Kuwait expelled hundreds of thousands of Palestinian Arabs for siding with Saddam. When the PLO took over parts of Israel, Jordan stripped Palestinian Arabs of citizenship.

Muslim countries have been very pragmatic about tossing their own cousins out the door the moment they show any signs of causing problems. Meanwhile Europe takes in known terrorists in the hopes of teaching them the joys of “moderate” Islam.

Instead of trying to find out how many of the Syrians we are taking in support ISIS and other Islamic terrorist groups, we can spare ourselves the effort by only taking in genuine Christian refugees while letting Jordan, Turkey, Syria and Saudi Arabia figure out their own Muslim refugee problem.

Because the surest way to keep Muslim terrorists out is not to let any Muslim immigrants in.

I am no brain trust but Daniel is exactly right. From a common sense standpoint, why should America have this "open border" policy when no other country in the world has anything near it? Thanks Sultan!

Dear Queen, you can keep your muslim refugees.

They are not wanted in America.

A recent poll of Muslims in America indicated that over 50 percent favored following their Sharia rather than our Constitution. Sharia law is inconsistent with most of the rights guaranteed all Americans by our Bill of Rights. For this reason, if we take any refugees from the Middle East, we must insist they are the Christians. We cannot allow them to be killed, raped, and/or sold as slaves by ISIS.

I cannot understand why the Progressive Democrats want to bring the Muslim refugees into America. Don't they understand that once they become a majority and can vote, they will implement Sharia Law. This means that Atheists will be killed as well as Christians. It means that GLBTUs will be pushed off buildings or killed in some other cruel fashion. It means that women will become sex slaves and have no rights. I guess the Progressives don't care as long as they can get their totalitarian government that controls every aspect of our lives.

Maybe they'd feel at home in Baltimore or Ferguson and certainly in NYC or Chicago.