Trump and Cruz are Precisely What the Putrescent GOP Leaders Deserve 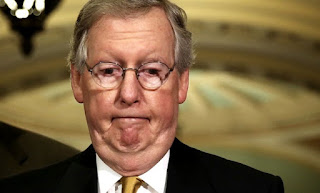 Over one hundred years ago, Ambrose Bierce, a 19th century political satirist, deploring the political corruption and lack of representative government, described Washington D.C. as a:

"Strife of interests masquerading as a contest of principles and the conduct of public affairs for private advantage."

How little things have changed.

Yet, seemingly oblivious to this persistent, fundamental problem in our political-media culture, Democrat and Republican Presidential candidates and political pundits of all stripes, arrogantly dismiss voter sentiment and choose to remain focused solely on their posturing for each election cycle driven by petty policy squabbles as to whether 2 + 2 = 3 or 2 + 2 = 5.

Ronald Reagan, by comparison, held a grander vision for America.

In his first inaugural address, at a time when the country was beset by economic woes and a vacillating foreign policy, Reagan urged Americans to recall the achievements of the Founders, in particular their confidence in self-government and individual freedom, noting that that ordinary Americans should be recognized as heroes and expressing confidence in the people exercising their freedom to revive America.

"Our Government," he emphasized, "has no power except that granted it by the people. It is time to check and reverse the growth of government which shows signs of having grown beyond the consent of the governed...In this present crisis, government is not the solution to our problem; government is the problem."

Yet, the political-media establishment has only contempt for ordinary Americans.

There is now a sharp division between the bipartisan ruling class and the rest of Americans, who are considered retrograde, racist, and dysfunctional unless properly controlled by the dictates of central authority.

When blatant and outrageous lies are no longer sufficient to soothe the electorate into complacency, such a government must begin to curtail freedom and oppress the people in order to remain in power.

The contempt for ordinary Americans and the pontificating arrogance of the Republican establishment was on full display when Fox News contributor and faux conservative George Will stated that Trump supporters need to come into the Republican Party "on our terms", not theirs.

That Republican Party, which Mr. Will wants voters to join, is one that consistently betrays its constituents and bows to Barack Obama's agenda:

Who "pre-approved" the Iran nuclear deal using, instead of the Constitution's treaty approval process, Republican Bob Corker's amendment (Corker/Cardin Amendment) changing ratification to a 67-vote-threshold for denial, as opposed to a customary 67 vote threshold for passage? The GOP.

Who did not block and voted to fund Obama's executive amnesty that Reince Priebus, the chairman of the Republican National Committee, called "un-American" and "unconstitutional, illegal" and promised that, if the Republican Party takes the Senate, they will do everything in their power to stop it? The GOP.

Who worked to re-elect Republican establishment Senator Thad Cochran, even after Cochran lost the first Mississippi primary to Tea Party-supported Republican Chris McDaniel, playing the race card and paying Democrats to vote in the second primary to defeat him? The GOP.

Did the GOP secure the border with control of the White House and Congress? NO.

Did the GOP balance the budget with control of the White House and Congress? NO.

Who said "I think we are going to crush [the Tea Party] everywhere."? Mitch McConnell of the GOP.

Reagan recapitulated the Founders' teaching on liberty, equality and consent of the governed in these two eloquent sentences:

"From time to time we've been tempted to believe that society has become too complex to be managed by self-rule, that government by an elite group is superior to government for, by, and of the people. But if no one among us is capable of governing himself, then who among us has the capacity to govern someone else?"

It is not Donald Trump that makes the political-media establishment look pathetic, but a disdain for self-government and its own lack of integrity, statesmanship and vision.

If Americans truly wish to elect someone who is very wise and who is dedicated to protecting and preserving our Constitution, Ted Cruz is the best candidate running. After eight years of the Obama and the Left's Social Marxists doing everything they can to fundamentally transform our country, Cruz will be a breath of fresh air. He grew up with a father who lived in Cuba under Batista and Castro so he experienced first-hand how evil Communism is.