The Obama White House rolled out the red carpet this week for leaders of the racist revolutionary Black Lives Matter movement, providing yet more confirmation that the Obama administration supports its members' increasingly violent activism.

News of the meeting comes after a Southern police chief was given the boot for posting a note critical of Black Lives Matter and of President Obama's incessant race-baiting. 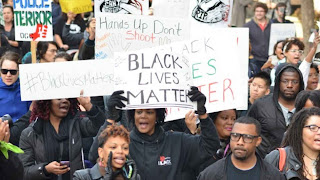 Black Lives Matter is animated not only by anti-white racism but by a hatred of normal American values, including law and order. Its members denounce the U.S. for imagined institutional racism and discrimination against African-Americans. Members idolize convicted, unrepentant cop-killers Assata Shakur and Mumia Abu Jamal, both of whom are black, and have declared "war" on law enforcement. Its members openly call for police officers to be assassinated.

“He offered us a lot of encouragement with his background as a community organizer, and told us that even incremental changes were progress,” she told reporters following the event. “He didn’t want us to get discouraged. He said, ‘Keep speaking truth to power.’”

President Obama’s senior adviser from Chicagoland, Valerie Jarrett, also met with the activists during the visit.

Packnett took to Twitter to pose a selfie photo with Jarrett with this text: "honest and action oriented. thank you [for] continuing to engage w[ith] the movement, Valerie."

According to Breitbart News:

Packnett has six recorded entries of visiting the complex long before the protests in Ferguson. She also was among the select group of Ferguson activists that met with Obama in December 2014. “I could tell he is taking this very personally,” Packnett explained after the 45 minute meeting with the president in the Oval Office. “He wants to see some clear, thoughtful action come from this.”

Jarrett, like Obama, has a long history of consorting with black militants and leftist radicals like former green jobs czar Van Jones who was forced out of his job after it was shown he had signed a 9/11 truther petition accusing the Bush administration or orchestrating terrorist attacks.

At this late stage in Obama's presidency the administration doesn't mind revealing its ties to radicals and unsavory individuals. The president doesn't care if the American people see how profoundly anti-American he really is.

White House attendee Phillip Agnew is executive director of a group called Dream Defenders. Kentucky cop killer Johnson-Shanks put a video on his Facebook page that features an appearance Agnew made on PBS last year. (Agnew also visited the White House this past December for a meeting with President Obama.)

"I'm mad at a system every day that stakes its claim on saying that there's a certain segment of society that is a criminal element," Agnew says in the video, spewing the stuff of paranoid leftist fantasy.

The Dream Defenders website describes the group as "an uprising of communities in struggle, shifting culture through transformational organizing." Its mission statement calls for "the destruction of the political and economic systems of Capitalism and Imperialism as well as Patriarchy," and for "an immediate end to the police state and murder of Black people, other people of color, and other oppressed peoples in the United States, the immediate release of the 2.5 million prisoners of the United States' War on the Poor, and trials by juries of our peers."

Meanwhile, newly unemployed Police Chief Mike Halstead of Surf City, North Carolina says he was forced out of his position for (accurately) speaking truth to power regarding the Black Lives Matter movement.

This constructive dismissal came after he wrote a Facebook post in which he called the movement a “terrorist group” and argued that President Obama has created a race problem in America.

“He put that information out, that was intended for his friends and colleagues and peers, but it was a public statement and there are people that were offended,” Surf City Town Manager Larry Bergman told the media.